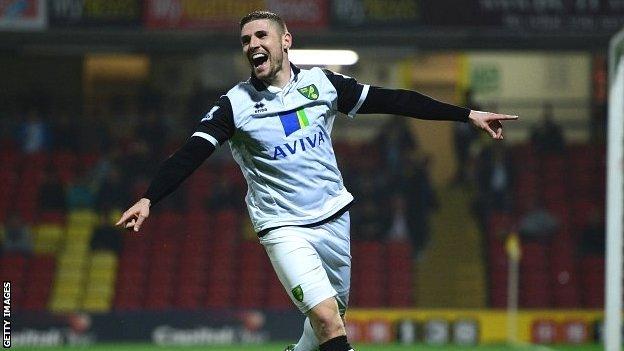 Premier League Norwich avoided an upset as Gary Hooper scored late in normal and extra-time on his first start to see off Watford in the Capital One Cup.

Hooper, who arrived at Carrow Road in scored 31 goals in 51 games for Celtic last season, but has been behind Ricky van Wolfswinkel and Elmander in manager Chris Hughton's selections so far this season.

Gary Hooper, who signed for Celtic from Scunthorpe for ÂŁ2.4m in 2010, was described as the best striker the club had had since Swedish legend Henrik Larsson by manager Neil Lennon.

But his boss was mightily relieved by Hooper's goals, the first of which arrived with Norwich just moments from a fourth defeat of the season.

A quiet opening 20 minutes gave little sign of the drama to come with the lively Nathan Redmond's shot the only effort of note.

But the game burst into life with Acuna, a summer signing from Girona, smashing a fierce drive beyond goalkeeper Mark Bunn.

Bradley Johnson headed against the bar as the visitors pushed for a response, but Acuna also went close with space easy to come by among the Norwich defence.

Norwich's introduction of Elmander at the expense of full-back Javier Garrido further opened up the game and Diego Fabbrini and substitute Troy Deeney went close before Faraoni blasted in.

Despite Murphy finding the net via the underside of the crossbar, Watford seemed set to preserve their unbeaten home record this season as the game ticked into injury time.

But Hooper glanced home in the fifth and final minute of injury time to prompt relieved celebrations on the visiting bench.

Both sides had chances to win it with Deeney and Martin Olsson going close at opposite ends, but Hooper, sprung by a pass from fellow summer signing Leroy Fer, kept his head to stroke the ball between goalkeeper Jonathan Bond's legs.

Deeney, who scored a dramatic late goal to send Watford to the play-off final last season, came close to adding another twist to the tale, but Mark Bunn kept out his effort.

Watford manager Gianfranco Zola: "It is a crushing feeling of course.

"We were winning a game and deserving to against Premier League opposition.

"But this game is about the attention you put in at crucial moments and that is the learning side for us."

Norwich manager Chris Hughton on Gary Hooper: "He is a finisher.

"I'm probably as delighted that he has got 120 minutes under his belt as I am with the goals.

"He is used to scoring but with all strikers it is about the service they get and showing a little bit of quality when they can.

"Both goals showed great movement, and it was a super ball from Leroy Fer for the third.

"Even in that second half of extra time I was looking at how he was running and he was fine."