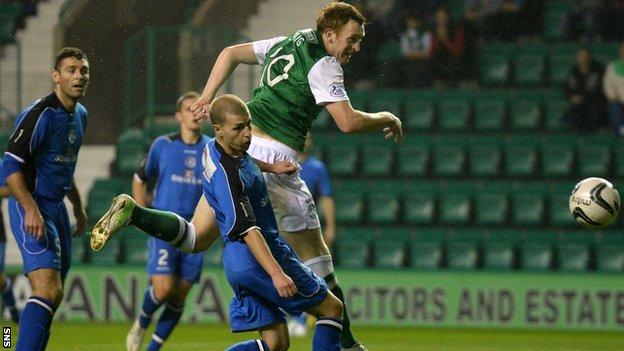 Liam Craig scored a hat-tick as Hibernian overcame a spirited Stranraer side in the Scottish League Cup.

Abdellah Zoubir's deflected strike put the hosts ahead before Stranraer's Scott Rumsby scored an own goal.

A strike by Craig was quickly countered by Chris Aitken's long-range drive and then Michael Nelson's own goal but Craig sealed victory with a penalty.

Hibs progress to the quarter-finals, which will take place next month.

It was the Scottish League One visitors who were first to have an attempt on goal. Neat play by Jamie Longworth set up Martin Grehan who tried his luck from 18 yards but his effort was blocked.

And Stranraer soon shocked the home side by going in front. Chris Aitken took a corner from the left and Longworth glanced a header past Ben Williams.

That goal appeared to spur Hibs into action and the hosts equalised five minutes later.

Zoubir found space out on the left and sent a cross into the box where Craig was on hand to convert.

Hibs began to take a real hold of the game and Stranraer keeper David Mitchell did well to keep out efforts from Nelson, Craig and Zoubir.

And their pressure paid off when Zoubir drifted in from the left and fired in a shot from 25 yards that was deflected into the net off the post.

And they very quickly scored number three, although there was a huge slice of fortune for the home side.

Alan Maybury sent in a cross that was touched into his own goal by Stranraer full-back Rumsby.

Hibs increased their lead shortly the restart. Ryan McGivern, who came on as a half-time substitute for Maybury, played a pass through for Craig to fired home from 10 yards.

Stranraer though were far from a spent force and Aitken gave the small band of travelling fans hope when he fired in an shot from 25 yards that ended up nestling in net.

And those same fans were in ecstasy a few minutes later when Nelson nodded an Aitken corner into his own net.

At this point the Stranraer players were beginning to believe they could complete their comeback but their hopes were dashed when Craig concluded his treble from the penalty spot after the midfielder's shot had been blocked by Marc Corcoran's hand.

Hibernian manager Pat Fenlon: "It was a cracking game from start to finish.

"Stranraer had a fantastic start and then we started to play. We scored some decent goals and then we gave away some sloppy goals.

"We have to give Stranraer a lot of credit, I thought they were very, very good.

"Liam Craig's been very good, for the last three weeks he's been excellent. He gets plenty of goals and his all-round game was very, very good tonight.

"When he does get in the box, he's got a great knack of being in the right area at the right time and there's not a lot of midfielders like that who chip in with so many goals.

"We want a home draw if we can, when you're in the cup that's the only thing you can ask for. There's some real good sides left in it so no matter who we get, it'll be a tough draw for us."

Stranraer manager Stephen Aitken: "I'm over the moon with the way we played. Nothing was expected of them.

"We kept on going. I was proud of the players.

"The pleasing thing for me is that we showed a great attitude. The players can hold their heads up high.

"It's a learning curve and I think the players will take a lot of heart from that."