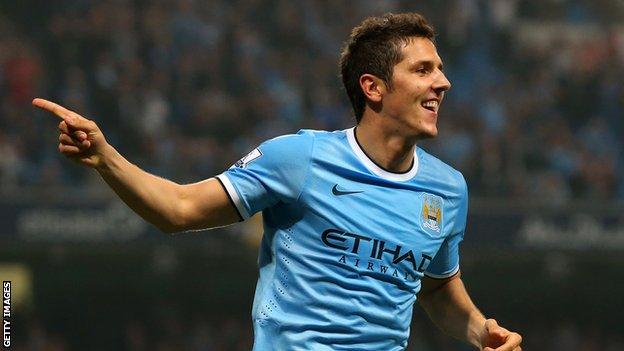 Manchester City's £22m striker Stevan Jovetic scored his first goals for the club to help Manuel Pellegrini's side to an emphatic Capital One Cup win over Wigan.

City gained some revenge for their FA Cup final defeat by the Latics in May as Edin Dzeko opened the scoring.

Jovetic scored twice, either side of Yaya Toure's free-kick, as City's class shone through in the second half.

Jesus Navas netted a late fifth as City eased into the fourth round.

City also hit the bar twice and forced Wigan's debutant goalkeeper Lee Nicholls into a number of excellent saves as they overwhelmed Owen Coyle's Championship side.

Their dominant display was even more impressive considering they made 10 changes to their team which hammered neighbours Manchester United on Sunday - Fernandinho the only player to retain his place.

Wigan barely figured as an attacking force and Stephen Crainey almost turned spectacularly into his own net in the second half as the hosts continued to do most of the attacking.

They got their second when Jovetic bundled in at the second attempt before substitute Toure whipped a free-kick over the wall and into the back of the net.

Montenegrin striker Jovetic scored another from close range before Navas broke clear and rifled in the fifth from 10 yards out following Ryan Shotton's poor clearance.

"I spoke with the players before we started the game, telling them we must always try to play the same way.

"We can change names but for me it was very important to see the same team we saw last Sunday, the same philosophy of football and the same high performance.

"I think it is very important for Stevan. He wasn't playing normally because he had some physical problems but the last two weeks he has been working hard and I am sure he is going to be a really important player for us."

"We worked ever so hard, playing against one of the elite clubs of world football, let alone English football.

"They made 10 changes and their team was probably worth about £200m. There is no getting away from it, we knew it was a tough ask.

"As if their starting line up wasn't enough, I think the three subs they brought on probably added another £100m to the tally, but I am disappointed to lose by any margin of goals."