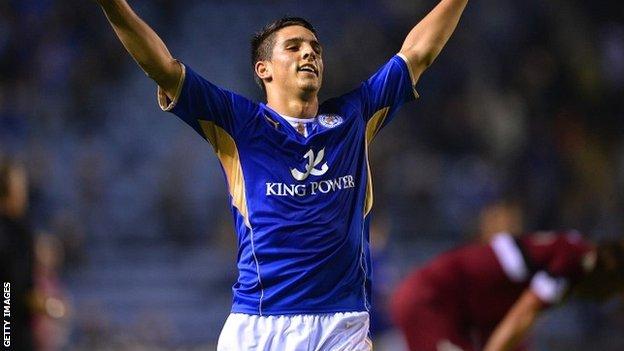 Anthony Knockaert inspired a second-half Leicester comeback to hand a first away defeat of the season to local rivals Derby in the Capital One Cup.

After Derby's Jake Buxton had an early header cleared off the line, the Rams took the lead as Chris Martin scuffed a shot past Kasper Schmeichel.

Danny Drinkwater grabbed the winner for the hosts with a backheel finish.

The victory denied Derby a first win in Leicester for over a decade and with the visitors on top for most of the game, it was Knockaert's introduction after 63 minutes that changed the course of the match.

His superb free-kick levelled matters and he had a hand in Drinkwater's decisive strike nine minutes from time.

Nigel Pearson made eight changes to his side, who are third in the Championship, almost went ahead in the first minute when Derby's Kieron Freeman had to clear the ball off his own line from a Tom Hopper header.

Nigel Clough's Derby side then created the best of the chances before good work inside the box from Johnny Russell set up Martin's opener.

Pearson brought on David Nugent and Lloyd Dyer after the break to try to give his side some added zest but it was Knockaert's arrival was the one that made the difference.

Defeat was cruel for Derby for as the substitute crashed his free-kick in off the bar and three minutes later another Knockaert set-piece found the net via a couple of deflections with the final touch coming off Drinkwater.

"We know he's a talented player. I can't remember too many shots he's had like that hitting the target, so well done to him.

"He still has a lot to learn but he's come on leaps and bounds in the 14 months we've had him.

"It's good to get through, that was the aim at the start of the night. The performance was a mixed bag, but that happens when you make so many changes. But I expected that lack of fluency a little, although I wanted us to show a little more impetus."

"We felt we'd done enough to win the game throughout the 90 minutes, certainly in the first half.

"It was an excellent away performance and the one-goal lead was not sufficient reward for how we played.

"With 10-15 minutes to go we are relatively comfortable and I don't think Lee Grant has had anything to do during the game up to that point. They were both needless free-kicks to give away so we feel we've contributed to our own downfall there."