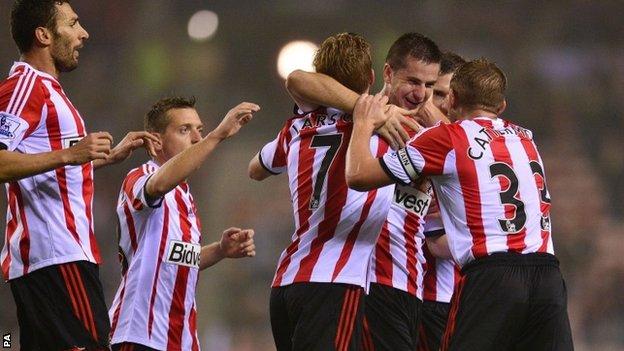 Sunderland made a winning start to life without sacked manager Paolo Di Canio as the Premier League's bottom club beat Peterborough in the League Cup.

Caretaker boss Kevin Ball ensured the Black Cats progressed to the fourth round in his first game in charge.

Emanuele Giaccherini converted Lee Cattermole's cross to give the home team the lead going into the break.

Valentin Roberge then headed home, scoring his first goal for the club and securing victory for the troubled side.

The defender, who had come on as a substitute, looked almost astonished as he celebrated his team's second win of the season.

Di Canio had dominated the headlines on Wearside throughout his 13-game tenure and the Italian, dismissed on Sunday following the 3-0 defeat by West Bromwich Albion, unsurprisingly continued to set the agenda in the build-up to this third-round match.

Sunderland's match programme focused on the former Swindon boss, with chief executive Margaret Byrne explaining that the Black Cats parted company with the 45-year-old because of a fear of being "cut adrift" at the bottom of the league table.

The League Cup, though, has offered Sunderland some respite this season, with their only victory under Di Canio coming in the second round of competition - a 4-2 home win over MK Dons.

A new-look Sunderland, including just three of Di Canio's summer signings, were the dominant side with the recalled Sebastian Larsson and Lee Cattermole orchestrating play from midfield.

Visitors Posh made a promising start, but the early injury to striker Lee Tomlin disrupted Darren Ferguson's men and from there on the home team took control.

Italy international Giaccherini - one of the trio of Di Canio summer signings - missed from six yards, but made amends when he half-volleyed Cattermole's cross beyond Robert Olejnik for the opening goal.

Sunderland could have doubled their advantage before the break, but Jozy Altidore's well-struck effort came off the post.

Peterborough rarely threatened, but the home side had to wait until the 73rd minute before ending the visitors' hopes as Roberge converted Adam Johnson's cross from 12 yards.

"I'm not sure how long I'll be in charge for. Maybe until Sunday, maybe longer. Who knows.

"Obviously I'm in contact with the board when I need to but I just like doing one game at a time.

"Some of the football we played was excellent and the changes they created showed they have confidence."