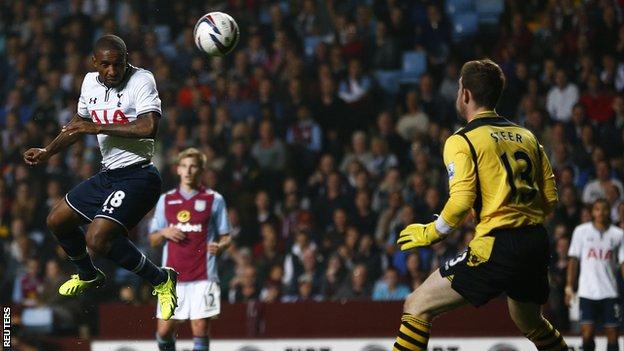 Jermain Defoe scored twice as Tottenham powered past Aston Villa and into the fourth round of the League Cup.

The England striker set Spurs on their way by glancing home Lewis Holtby's clever pass before completing the victory with a late finish.

Paulinho and Nacer Chadli were also on the scoresheet as Tottenham dominated.

However, Villa should have been awarded a penalty early in the second half when Nicklas Helenius was impeded by Jan Vertonghen.

The visitors only led by a single goal when Danish striker Helenius nipped in front of Vertonghen and bizarrely had his shorts pulled down by the tumbling Belgian defender.

However, much to the bemusement of Villa manager Paul Lambert, referee Jon Moss turned down the penalty appeals.

That might have given Villa a way back into a match which Tottenham dominated, despite manager Andre Villas-Boas's pre-match assertions that it would be a risk for his players to play so soon after Sunday's victory over Cardiff.

Only Vertonghen, Kyle Walker and Paulinho retained their places in the Spurs side as new boys Erik Lamela, a club record £25.7m signing from Roma, and Vlad Chiriches were given opportunities.

And Defoe, who has scored six goals in his three first-team starts this season and is now Tottenham's fifth highest goalscorer in history, relished the clever balls being played in behind the defence by Lamela.

Villa goalkeeper Jed Steer, making his second start of the season after a summer move from Norwich, kept his side in the game with a number of fine saves.

But he could do nothing about Defoe's opener at the end of the first half as the striker deftly headed home Holtby's cute clip over the defence.

Following Helenius's failure to win an early second-half penalty, Paulinho doubled Tottenham's lead when he lost his marker and poked in Holtby's corner at the near post.

Villa winger Aleksandar Tonev forced Brad Friedel into a save with a stinging 25-yard shot but Tottenham completed their convincing win as the hosts tired.

First Chadli latched on to a loose pass and rifled in at the near post before Defoe skipped around Steer to tap in his second of the night.

On Nicklas Helenius getting his shorts pulled down: "That was a big moment. It thought it was a pen. I don't think anybody could believe it. It was a strange decision.

"I didn't think there were four goals in that. We had a lot of players out injured and they were too much for us. But I couldn't fault the lads for effort.

"We gave it a go in the second half and their second goal was a really poor goal from our point of view.

"There are a couple of plus points from individual performances. Nathan Baker is coming back after injury. Marc Albrighton was excellent."

On the Helenius penalty appeal: "It was a difficult decision for the referee. I can understand why Paul would not be happy with that decision.

"Most likely in this situation there is no advantage to be gained and the penalty has to be whistled. Probably we got away with it.

"We've shown a great team spirit this year. The players are all buzzing for opportunities like this so most of them really performed tonight.

"The best thing about this evening is that the players who came in responded well and respected the competition."