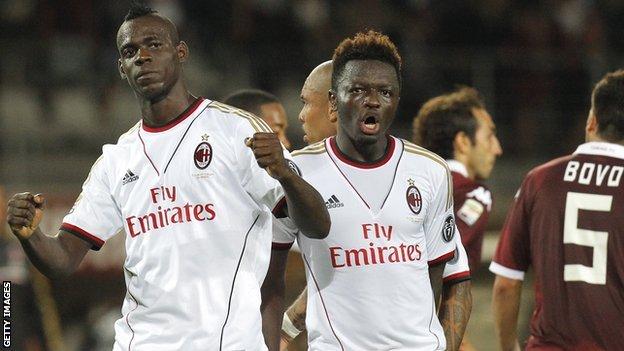 Massimiliano Allegri believes is already a crucial game despite it being the opener in Champions League Group H.

With Barcelona and Ajax also in the section, any points dropped at home by his AC Milan side could be crucial.

"We can't afford to slip up against Celtic on Wednesday," the coach said after a 2-2 draw at home to Torino.

"At the moment, our defensive play is just not where it should be - and I'm talking about as a team."

We need to work harder. Conceding five goals in three games is just not good enough

Three games into the Serie A season, Milan sit five points adrift of pacesetters Napoli and Roma after an opening defeat by promoted Verona, a win over Cagliari and the draw with Torino.

Counter-attacking goals after the break from Danilo D'Ambrosio and Alessio Cerci had Torino 2-0 ahead until late goals from Sulley Muntari and, deep into stoppage time, Mario Balotelli rescued a point for Milan.

"We didn't play well," said Allegri. "Torino were strong, especially on the counter-attack, and showed their speed and technical ability when going forward.

"We need to work harder. Conceding five goals in three games is just not good enough."

Allegri's problems are not helped by having five players, including captain Riccardo Montolivo and , absent for Celtic's visit through injury and another four said to be injury doubts.

"We'll make do with who we have and we'll have fresh players ready to play what is a delicate and important game," added the Milan coach.

Meanwhile, Alessandro Matri says his first Champions League match at the San Siro will be "an emotional night".

Matri scored twice against Celtic for Juventus in last season's round of 16 tie in the tournament and moved to Milan during the summer.

"I played well against them last season, so maybe that's a good sign and let's hope it happens again," he told the AC Milan website.

"Celtic are a tough team, but they're not just physical. It'll be up to us to start the match on the right track and the fans will be a big help."