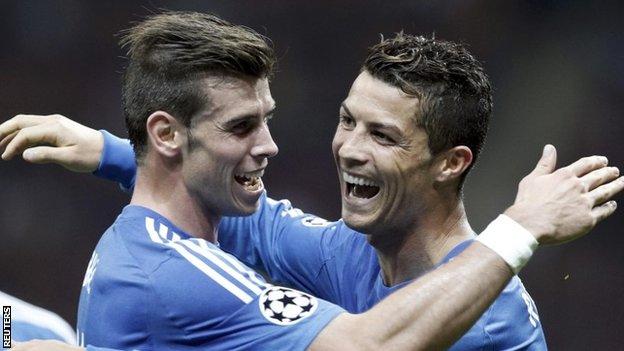 Gareth Bale came on to help Cristiano Ronaldo score one of his three goals as Real Madrid beat Galatasaray 6-1 in their Champions League Group B clash.

Within moments of replacing opening goalscorer Isco, Bale delivered a free-kick that eventually landed at the feet of Ronaldo, who tapped in for 4-0.

Ronaldo is now the fourth-highest scorer in Champions League history with 53 goals.

Ruud van Nistelrooy has scored 56, Lionel Messi has 59, while Raul has 71.

"We couldn't have started better. To start in this manner gives us a lot of confidence," Ronaldo said.

"We did our job against a very complicated opponent. Despite the result it was a difficult game.

"In the first few minutes they had their best chances. After our first goal we controlled the game and played well."

Bale, who came on in the 64th minute having made his club debut at the weekend, added: "The biggest reason why I joined such a club is to play in the biggest competition. It's great to get a win and get off to good start.

"I had no pre-season whatsoever. I felt good when I came on today. It's been a different situation not having a pre-season. I feel like I'm getting there with minutes on the pitch."

In the other Group B match, Juventus came from behind to draw 1-1 at FC Copenhagen. Nicolai Jorgensen gave the Danish side the lead in the 14th minute before forward Fabio Quagliarella equalised in the second half with a left-footed finish.

Holders Bayern Munich eased to a 3-0 win over CSKA Moscow in Group D, with David Alaba scoring the pick of the goals - a stunning free-kick in the opening five minutes. Manchester City kept pace with the German champions with a 3-0 win at Viktoria Plzen.

In Group A, Wayne Rooney twice found the net as Manchester United eased to a 4-2 win over Bundesliga visitors Bayer Leverkusen, while Brazilian midfielder Alex Teixeira scored both goals for Shakhtar Donetsk as they recorded a 2-0 victory over Real Sociedad in San Sebastian.