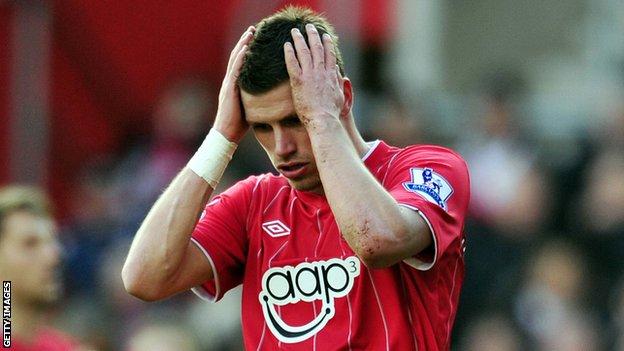 Southampton's Morgan Schneiderlin has backed his side to find their scoring touch as they await their first league goal from open play this season.

Sunday's 0-0 draw with West Ham left them 11th with only two league goals.

"Of course it's an issue because we can't win games at the moment, but we have very good players and it's not like we didn't create anything [on Sunday]," he told BBC Radio Solent.

"It's just a matter of time. The only worry is if we didn't create anything."

You can always say 'I should have done better', but all credit to their keeper, he made some very good saves

Despite hammering Championship side Barnsley 5-1 in the Capital One Cup, Southampton's only league goals this season have been a Rickie Lambert penalty and Jose Fonte's header from a James Ward-Prowse free-kick.

However, had it not been for the excellent form displayed by Hammers keeper Jussi Jaaskelinen at St Mary's, the Saints may have found the back of the net.

And French midfielder Schneiderlin says his side were left ruing the veteran Finn's performance.

"You can always say 'I should have done better', but all credit to their keeper, he made some very good saves," the 23-year-old said.

"It's very hard to take, but that's football and fair play to him, and now it's just up to us to score goals."