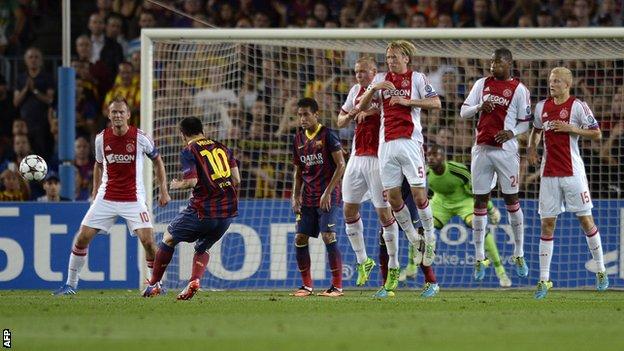 Lionel Messi scored a hat-trick for Barcelona, the night after Cristiano Ronaldo's treble against Galatasaray, as the 2011 champions beat Ajax 4-0.

The Germans had goalkeeper Roman Weidenfeller dismissed for handling outside the penalty area and saw manager Jurgen Klopp sent to the stands following an altercation with the fourth official.

"On my sending-off, I can only blame myself, it was stupid," said Klopp. "Without the red card and my own expulsion, we could have done something."

It was a fine start for Rafael Benitez's Italian outfit, who hold a 100% record in Serie A this season, with summer signing Gonzalo Higuain heading in and Italy international Lorenzo Insigne smashing in a superb free-kick. A late Camilo Zuniga own goal was the only highlight for Dortmund.

Only former Real Madrid and Schalke striker Raul (71) has scored more goals in the competition than Messi, who now has 43 goals in his last 41 Champions League games.

The Argentine caressed home a free-kick via the inside of the post from just outside the area for his first on 21 minutes.

It took until the 55th minute to double his tally, breaking into the area and guiding his shot in at the near post. He completed his treble by feigning to shoot before finding the bottom corner 15 minutes from full-time.

"It was important to start with a win, especially playing at home," said Messi. "We know how difficult these Champions League groups always are.

"In the second half we had the ball and controlled the match. We found it tough to pressure them initially because they were moving the ball well out from the back. But I think in general it was a great performance."

Barcelona manager Gerardo Martino said: "It is very important for the club and the team to gain confidence and start the group stage with a win at home.

"Thanks to having more of the ball we were more stable and we pressurised them better. I think we will find the variation we need, we are still just at the beginning of the season."

In Group E, Schalke went top after defeating Romanians Steaua Bucharest 3-0, with Atsuto Uchida, Kevin-Prince Boateng and Julian Draxler scoring for the Germans. Chelsea were shocked 2-1 at Stamford Bridge by Swiss side Basel.

And in Group G, Miranda, Arda Turan and Leo Baptista were on the scoresheet for Atletico Madrid, in a 3-1 victory over Russian side Zenit St Petersburg, who scored through Hulk. In the group's other game, 2004 winners Porto narrowly beat Austria Vienna 1-0 - Argentine Lucho Gonzalez scoring the only goal of the game.