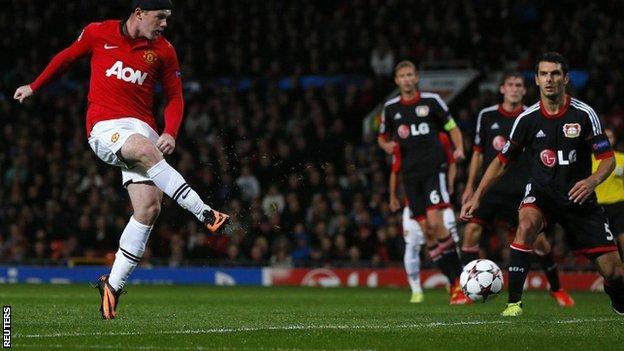 David Moyes began his Champions League campaign as Manchester United manager with victory against Bayer Leverkusen on a night Wayne Rooney scored his 200th goal for the club.

Rooney has emerged as United's outstanding performer so far this season after a summer of transfer speculation and he was the inspiration once more as Bayer Leverkusen were comfortably beaten.

The striker - still wearing protection on the head wound that sidelined him for the defeat at Liverpool and England's draw in Ukraine - put the hosts ahead in contentious fashion as the German side appealed furiously for offside.

And United had to survive a minor scare when Leverkusen captain Simon Rolfes equalised early in the second half before Moyes' side fashioned the emphatic victory their superiority deserved.

Robin van Persie's acrobatic volley put United back in front before Rooney turned on the style once more by scoring United's third and setting up another for Antonio Valencia with a pass weighted to perfection.

Omer Toprak's scrappy late second for Bayer could not take the gloss off a highly satisfactory night for Moyes on his first European adventure with United.

Rooney produced a body of evidence that only emphasised why Moyes and United were so steadfast in their refusal to consider his sale, despite the player's discontent and offers from Premier League rivals Chelsea.

Rooney's rehabilitation has been impressive and he was easily United's most dangerous performer as the Premier League champions got the three points they needed to start this Group A campaign.

He proved too powerful for the Bundesliga side to control and it would have been a familiar sight to their coach Sami Hyypia after his 10-year career at Liverpool.

Son Heung-Min was unfortunate to be shown a yellow card for a tussle with Rooney - but Leverkusen's pain was even more acute when he put United ahead in controversial fashion after 22 minutes.

Leverkusen thought Van Persie was offside in the build up but they were even more aggrieved when the referee's assistant - standing almost on top of the incident - failed to spot Valencia standing in a clearly offside position alongside keeper Bernd Leno as Rooney swept in Patrice Evra's cross.

Leverkusen showed signs of life after Rooney's goal but it was United, with Marouane Fellaini patrolling midfield effectively on his full debut, who were dictating terms and creating the better chances, with Rooney just off target with a free-kick and Shinji Kagawa's shot deflected just wide.

Rooney should have doubled United's lead, or at least given Van Persie the opportunity to do so, in a remarkable passage of play early in the second half.

Toprak's slip left Rooney clear as he rounded Leno but he decided to shoot rather than play the simplest of passes to Van Persie in front of an open net and fired his effort across the face of goal.

It was real reprieve for Leverkusen and they took full advantage seconds later as captain Rolfes swept a precise finish past motionless United keeper David de Gea, with the help of the slightest glance off Michael Carrick, after 54 minutes.

Leverkusen were only on terms for five minutes before Van Persie restored United's advantage with a typically athletic volley from Antonio Valencia's cross - although he was aided by a dubious attempt to save from Leno, who flapped limply at the shot as it went past him.

It effectively settled the contest and Rooney wrapped it up with a clever finish past Leno at the near post for a 200th United goal since his move from Everton in 2004.

And there was a touch of the old United flourishes when they went further in front with 12 minutes left. Rooney was instrumental once more as they broke at pace, bursting clear before providing an inviting pass for Valencia to take in his stride and drill past Leno.

Toprak scrambled in Leverkusen's second after 87 minutes - but it hardly qualified as consolation and Van Persie should have scored another only to somehow turn his effort across the face of an open goal when it seems more difficult to miss.