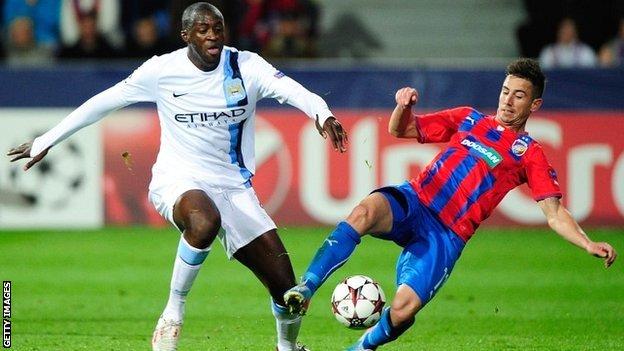 Yaya Toure hopes that Manchester City will finally produce their best in the Champions League after a successful opening to this season's campaign.

"The last two years were quite disappointing for us, for the fans and for the club," said the 30-year-old.

"It's important for us to prove to the fans who love Manchester City that this year is going to be our year."

City have failed to make it to the knockout stages in the last two seasons and the win in the Czech Republic was the first time they have begun the group stage with victory.

Toure, who now has three goals this season, added: "Our most important target is getting through to the second round and showing improvement."

It also gave new boss Manuel Pellegrini his first European win as City boss as he looks to replicate his success at former teams Villarreal and Malaga.

City chairman Khaldoon Al Mubarak has admitted that the Champions League has been a source of "disappointment" for the club and its middle eastern owners under previous manager Roberto Mancini.

But Pellegrini said that both the Champions League and the Premier League, which City won in 2011, had the same value to the club.

"We don't have a priority on this," he said. "We didn't play well in the last Champions League last season but the Premier League is also very important for us and we will continue in both with the same level of priority."

In addition to the result, there was further good news for Pellegrini, who saw captain Vincent Kompany return from injury and complete 90 minutes ahead of Sunday's Manchester derby.

"It will give confidence for all the players," he said. "

"We have the derby next Sunday and winning away in the Champions League, scoring three goals, having at least three or four more chances to score and a clean sheet - I think it will give all the players a lot of confidence for the next games."