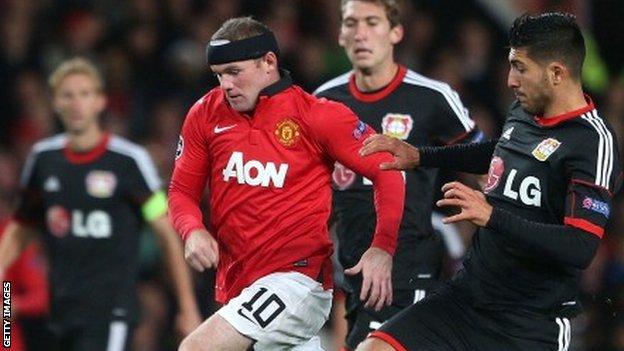 In the dark days of summer discontent as Wayne Rooney once again glanced towards Old Trafford's exit, David Moyes made his opening pitch as Manchester United manager.

Moyes was sitting in the famous stadium's Europa Suite fending off questions about Rooney's future with the same dexterity and determination as he was fighting off offers from Chelsea for a player enduring his latest bout of dissatisfaction with life at United.

The Scot met every question and every bid from Chelsea with the same answer. "Not for sale" - especially not to Jose Mourinho and Chelsea.

And to emphasise his point, Moyes revealed he had made it clear to Rooney that the greatest opportunity to leave a legacy that would last a lifetime lay at Old Trafford not Stamford Bridge. It was the opportunity to become a Manchester United legend.

The rationale behind United's hard-line stance on Rooney was demonstrated in 83 minutes at Old Trafford on Tuesday as Moyes enjoyed a successful entry into the Champions League group stage with a fine 4-2 win against Germany's Bayer Leverkusen.

Rooney not only gave the sort of display that Moyes and United could use as compelling evidence to support their case for the refusal to countenance his departure, he also took a significant stride towards that place in Old Trafford history that his manager said could be his prize for staying.

His second goal, a clever finish at the near post, was his 200th goal for United since his move from Everton in summer 2004. In that moment he became only the fourth man to reach that milestone, a feat achieved in 406 appearances.

Jack Rowley's 211 will be his next target followed by the 237 scored by the great Denis Law - with the pinnacle being the possibility of overtaking Sir Bobby Charlton's current club record of 249.

Rooney is not 28 until the end of October, so with fair fitness and a continued commitment to United he has every chance of becoming Manchester United's greatest goalscorer. Some accolade.

He has yet to offer public long-term commitment to United but his performances this season speak eloquently on his behalf and he was outstanding against Leverkusen.

Rooney was Manchester United's man apart - as he was on the opening day of the season in the wind and driving rain of Swansea.

This time, however, circumstances were much happier.

In South Wales, as the Moyes era began, Rooney cut a distracted figure in the pre-match warm-up. He helped set up two goals for Robin van Persie and Danny Welbeck after coming on as substitute but pictures of a solitary Rooney yards away from the celebrations illustrated his discontent.

What a transformation in the intervening weeks, Rooney's position (and perhaps his mind) has been clarified by United's point-blank refusal to let him go and maybe even the realisation that he will not get a bigger, more fitting, stage than Old Trafford.

Here it was Rooney's quality that set him apart, not his unhappiness.

Rooney received a standing ovation from United's fans when he was substituted after 83 minutes but this is no rekindled love affair. The supporters, in a contrasting reaction to his earlier demands to leave in 2010, have never wavered this time - lending vociferous backing even in the face of his desire to leave.

It always seemed Rooney's gripe was with former manager Sir Alex Ferguson, and a different interpretation of a conversation at the end of last season when the Scot claimed he had asked for a transfer, rather than with Moyes.

And as he ran Leverkusen ragged, Rooney looked at peace with his lot at United and happier in his football than he has for some time.

It was merely confirmation of what Rooney has offered so far this season. He was United's best player in the goalless draw against Chelsea, desperately missed in defeat at Liverpool and in England's World Cup qualifying draw in Kiev after sustaining a head wound in training, and back with a goal against Crystal Palace on Saturday.

Moyes & Rooney in the Champions League

He still bears the scar of his accidental kick from United and England team-mate Phil Jones - but the headband he is wearing as protection has become a precious piece of kit for Moyes as it has allowed Rooney to get back on the pitch in this period of rejuvenation and rehabilitation.

Whatever his feelings on his Manchester United future, he has been a model of quality and consistency so far this season.

He was the centrepiece of United's victory against Leverkusen. Not only did he score twice but the old zip was back as well as a burst of pace. This was demonstrated in one electrifying turn down by the corner flag in the first half and the counter-attack he led with 12 minutes left that ended with a perfectly weighted pass for Antonio Valencia to score United's fourth.

It was a performance laced with quality from a trim-looking Rooney. He could even be excused an horrific miss with United leading 1-0 when he ignored the possibility of passing to Robin van Persie for the easiest of tap-ins (maybe not so easy given the Netherlands striker's own shocking miss later) and shot across the face of goal.

Simon Rolfes threatened to make United pay for that moment with an equaliser for Leverkusen but once Van Persie had restored their lead it was left to Rooney to take the honours.

United and their supporters still wait for the public confirmation that all is well with Rooney's world but sheer weight of performances on the pitch hardly hints at an unhappy player.

Moyes and United's hierarchy deserve credit for riding out another Rooney storm to what looks like a successful conclusion.

And in this mood, Rooney can put himself on course for that place in Manchester United's Hall of Fame that Moyes suggested could be his if he stayed at Old Trafford.