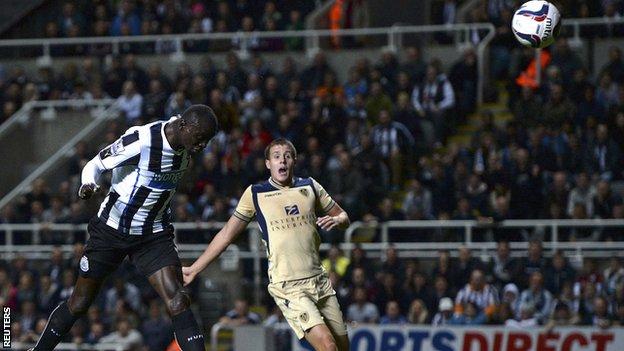 Papiss Cisse's first goal of the season helped Newcastle United move into the fourth round of the League Cup with a comfortable win against Leeds.

Championship side Leeds hit the woodwork in the opening five minutes through Ross McCormack's clever chip.

Senegal striker Cisse, who had not scored in his previous 11 games, buried a bullet header from Sammy Ameobi's left-wing cross after 31 minutes.

Yoan Gouffran sealed victory with a clinical finish from 18 yards.

Matches between these two clubs used to be a regular occurrence in the Premier League throughout the 1990s and early 2000s before Leeds were relegated from the top-flight in 2004.

It was their first competitive meeting since then and the quality of a strong Newcastle side shone through as they eventually controlled proceedings against the visitors.

Newcastle, who suffered a surprise 3-2 home defeat against newly promoted Hull at the weekend, started slowly as Scotland forward McCormack's delicate effort was pushed on to the crossbar by goalkeeper Tim Krul.

However, the hosts took the lead when Cisse met Ameobi's pinpoint centre to power past visiting goalkeeper Paddy Kenny.

It was his first goal since netting in the 1-1 draw against Europa League opponents Benfica on 11 April.

Ameobi, who is the younger brother of Magpies striker Shola, was handed a rare start by boss Alan Pardew and he made the most of the opportunity by also providing the second goal.

The 21-year-old supplied the pass which allowed Gouffran to turn his marker on the edge of the penalty area before firing in an unstoppable shot.

Newcastle boss Alan Pardew pitted his wits against Leeds counterpart Brian McDermott - who was given his professional coaching break by Pardew at Reading in 2000.

But Leeds, who are 13th in the second tier, enjoyed promising spells, with striker Matt Smith heading wide Sam Byram's cross as they searched for a lifeline.

There was a poignant moment in the first half as both sets of supporters united to pay tribute to ex-Leeds and Newcastle midfielder Gary Speed, who died aged 42 in November 2011. Fans chanted his name from the 11th minute to mark the shirt number he wore for each club.

"All strikers when they are not scoring don't feel like they have done their job. Goalscorers want to score goals and Papiss Cisse is always disappointed if he hasn't scored.

"He has had a few good chances in these last few games, but that was an important goal - how important, we will have to wait and see.

"He had a couple of big chances before that and snatched at them, and it just goes to show where he was, really."

"Their first goal, from their point of view, was a little bit of quality on the left-hand side and maybe we needed to do better in that situation, but it was a good header, and their second goal was a great finish.

"Having said that, at 1-0 Matt Smith was bundled over in the penalty area and I think because he is a big lad, the ref didn't give it. But it was a certain penalty, there's no doubt about that."