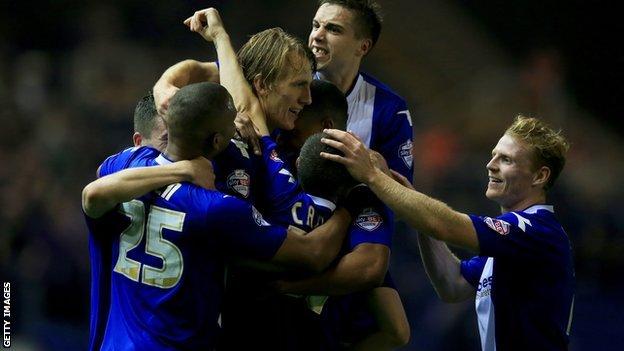 Holders Swansea City are out of the League Cup after a shock third-round defeat by Championship side Birmingham City at St Andrew's.

After a goalless first half, Dan Burn put Blues in front with a header.

A right-footed finish by Matt Green from Chris Burke's cross and a tap-in by Tom Adeyemi gave Lee Clark's side an unassailable lead against their Premier League opponents.

Manager Michael Laudrup may rue the 10 changes he made to the Swansea side that beat Crystal Palace in the league on Sunday for their first Capital One Cup game since last year's final win over Bradford.

Midfielder Jonjo Shelvey was the only survivor from the 2-0 win over Palace but this was still a Swansea side full of Premier League experience.

There was no evidence in the first half that the holders would succumb to a Birmingham side who had won only one of their previous seven games.

But the home side completely outplayed the Swans after the break and the one disappointment for the 2011 League Cup winners will be that only 7,470 turned up to watch them beat top-tier opponents who have just won 3-0 at Valencia in the Europa League.

The visitors had the first real chance of the game when record signing Bony hit the bar with his header from a Jonathan de Guzman corner before his strike-partner Alejandro Pozuelo pounced on the rebound, only to see his shot hit the post.

Bony wasted a handful of opportunities in the first half but he was also denied by a superb tackle by Birmingham defender Paul Robinson as he bore down on goal.

But Birmingham looked a different proposition in the second half and led with two goals in four minutes either side of the hour mark.

Birmingham won the League Cup in 2011 but they were relegated from the Premier League and replaced by Swansea City.

Sloppy defending by Swansea allowed Fulham loanee Burn a free header to score his third goal for Birmingham from a cross by midfielder Paul Caddis.

Green then doubled the home side's lead when striker Green met Mitch Hancox's cross with a superb right-foot finish at the back post to make it 2-0.

The home side then completed the victory with a third goal, nine minutes from time, when midfielder Adeyemi profited from some good work by winger Burke to tap into an open Swansea goal.

Bony scored his sixth goal in nine games for Swansea deep in injury time, but it the Welsh club's cup rein was long over by then.

"I'm absolutely delighted. I think to win a game like that against the quality of opposition we're up against is very satisfying.

"Not only are Swansea the holders but I said before the game that I felt it was the hardest tie we could have got outside the so-called top six, a club that's on the up in everything that they do.

"Even though they made changes I don't think it affects them as they've got a philosophy that runs through the club."

"I want to go as far as possible in all competitions. We lost the possibility to go far in the competition.

"I have no regrets (about making 10 changes). You could say 10 changes from the last game but five of the players who played here were in the starting XI against Valencia.

"I don't think I'm wrong if I say we could have been four up at half-time.

"And then with Birmingham's first chance they score, and then the other two goals I think there was a little misunderstanding at the back and in the end we lost the game."