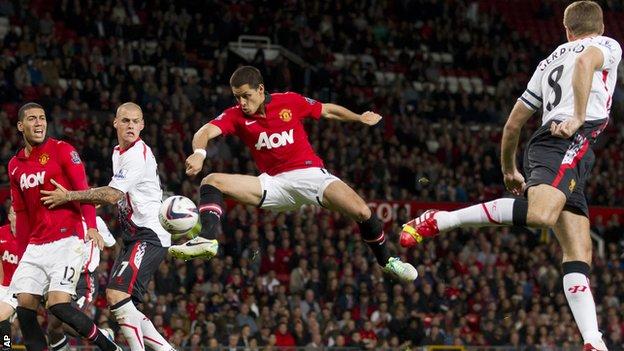 Luis Suarez could not rescue Liverpool on his return from a 10-match ban as Manchester United's Javier Hernandez netted an early second-half winner in their League Cup third-round tie.

Hernandez's volley from Wayne Rooney's corner - 39 seconds after the restart - avenged the defeat Liverpool inflicted on United when the teams met at Anfield this month, and will help new boss David Moyes put Sunday's thrashing by Manchester City behind him.

But the visitors were unlucky not to get on the scoresheet at Old Trafford, where they were on top for long periods.

Suarez, who was suspended for biting Chelsea's Branislav Ivanovic in April, helped create a host of opportunities alongside Daniel Sturridge and hit the bar with a second-half free-kick.

But there was also evidence of his ring-rustiness in a match that only came to life in the second period.

Before Suarez's set-piece, a Victor Moses header drew a superb save from David De Gea while Shinji Kagawa struck the woodwork at the other end.

Moyes had asked for a reaction from his side after their derby mauling - although he made eight changes to the side humbled at the Etihad - and the Scot certainly saw an improvement on that showing.

Victory for Moyes makes it the best start for a new Manchester United manager since Matt Busby in 1945 and extended his side's run to six successive home wins over Liverpool.

After a promising start to the season for Brendan Rodgers' side, they are now without a win in three games but the Reds boss will hope Suarez's return will see an upturn in their form.

The 26-year-old was thrown straight into the starting XI and, though booed by the home supporters whenever he touched the ball early on, looked immediately at home in an adjusted 3-5-2 formation in which the Uruguayan and strike partner Sturridge were supported by Moses.

It was a system the hosts struggled to cope with in the first half as the Liverpool front trio found plenty of space in deep and wide areas.

Tellingly though, given his extended absence, Suarez was twice let down by a poor touch when well placed, while Sturridge was denied by solid United defending as he bore down on goal and almost connected with a Jose Enrique centre.

Any notion that Suarez would rein in his competitive streak disappeared halfway through the first period when he miscontrolled another Enrique cross, but still went in for a 50-50 challenge with United keeper De Gea, Suarez just touching the ball first before the Spanish keeper smothered it.

As fluid as Liverpool were, they were aided by some poor passing from United and, when the hosts did attack, new Liverpool defender Mamadou Sakho denied them with a series of superb blocks and challenges.

But when United won a corner seconds after the restart, Rooney - captain for the night - found the unmarked Hernandez five yards out, and the Mexican fired home, sparking celebrations from Moyes who was still on the way back to his seat.

After a first half where the defences were on top, the second saw several clear-cut chances with Jordan Henderson side-footing wide from eight yards after cute link-up play between Suarez and Sturridge, before Kagawa hit the crossbar after turning past Lucas.

Liverpool responded and came close to equalising twice in two minutes as De Gea saved Moses's diving header and Suarez's deflected free-kick clipped the bar and went behind for a corner.

Rooney then went close to adding a second for United from another free-kick but Simon Mignolet saved.