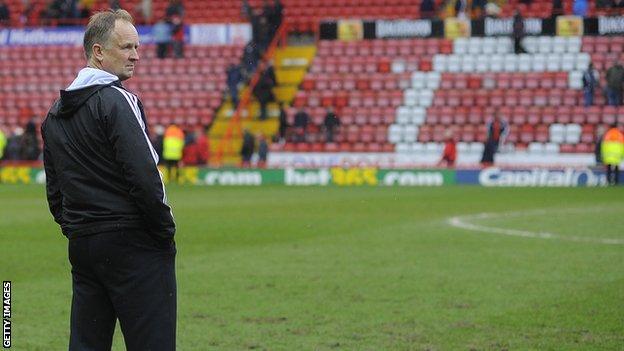 Bristol City head coach Sean O'Driscoll has asked for fans to be patient as they continue to look for their first win of the League One season.

Although they have won three cup games this term, City have not registered a league victory since March.

Speaking after their 1-1 draw with Shrewsbury, O'Driscoll said: "If they bear with it, we'll be ok.

"But this is going to be a difficult season - I've said it time and time again." he told BBC Radio Bristol.

"We're not anywhere near where we should be because we are still starting on this journey."

O'Driscoll took over from Derek McInnes as boss in January, with City bottom of the Championship, and he could not save them from relegation.

They were tipped for promotion straight back to the second tier but have claimed only four points from seven games.

City were 1-0 down at half-time against the Shrews, but rescued a draw thanks to Jay Emmanuel-Thomas's sixth goal of the season.

At the break, fans were heard booing from the stands and O'Driscoll says he is aware of their frustrations.

"I understand it but I'm the person who is trying to encourage them [the players] to keep moving the ball. I've got to support them.

"But you get the sense that people are waiting for us to fail now and the players sense that, so they try harder not to.

"I said at half-time the players need a solution, not ranting and raving. They need someone to tell them 'this is what you do'.

"We did that and slowly we crept back in to the game."