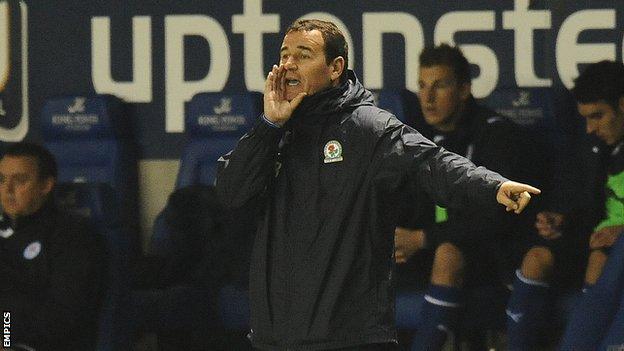 Blackburn manager Gary Bowyer says he is being frustrated in his attempts to bolster his attacking options.

and are recovering from injuries, while Leon Best is currently out of the side because of a disciplinary matter.

"It's been no secret that we've been trying for a while now," Bowyer told BBC Radio Lancashire after Rovers' on Tuesday.

"The good ones that are around, people don't want to let them go."

He's an asset that, when he comes back and he's fit, will prove valuable to us

Bowyer is keen to get more support to record signing and top scorer Jordan Rhodes, who netted his sixth goal in four league games at the King Power Stadium.

"David Dunn had done very well for us playing in the number 10 role in the previous couple of weeks," added the 42-year-old.

"We decided at half-time [against Leicester] to go with Josh King up there to see how that went. We were a bit more open but we had a go. We didn't lay down and die."

Best, who missed most of last season with a serious knee injury, recently used a social network site to question why he was not in Bowyer's plans.

Bowyer has said the matter is being dealt with internally, while former QPR striker Campbell is still some way short of making a comeback.

"If you ask DJ, he was ready yesterday, but he's maybe another week or two away," said Bowyer, who is yet to oversee an away victory this season.

"He's an asset that, when he comes back and he's fit, will prove valuable to us."