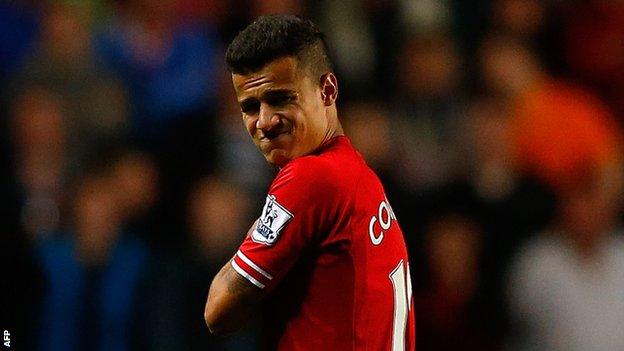 Liverpool playmaker Philippe Coutinho requires surgery on an injured shoulder and is expected to be out until the end of October, his club have announced.

The 21-year-old Brazilian, who signed from Inter Milan for £8.5m in January, has helped Liverpool to the top of the Premier League after four matches.

He was taken off after suffering the injury in Monday's 2-2 draw at Swansea.

"It's been decided Coutinho will now have surgical stabilisation on the AC joint in his shoulder," Liverpool said.

Liverpool hope he will be "back in contention again towards the end of October".

Despite the absence of star striker Luis Suarez - who is still serving a 10-match suspension for biting Chelsea's Branislav Ivanovic last season - Liverpool have made an excellent start to the season, with victories over Stoke, Aston Villa and Manchester United prior to Monday's draw at Liberty Stadium.

England international Daniel Sturridge became the first Liverpool player to score in the first four matches of a Premier League season with his goal at Swansea, while Suarez will be available for the League Cup match at Manchester United on 25 September.