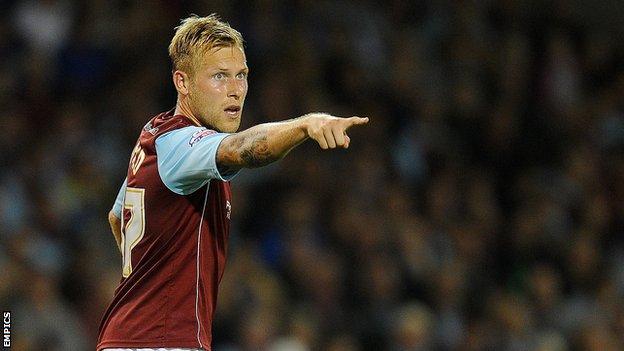 Scott Arfield hopes his goal in the win over Birmingham on Tuesday will go some way to atoning for the error that cost Burnley two points against Blackburn.

But he netted his second goal for the club in the

"After Saturday and the disappointment of the error, it makes it that bit better for myself," midfielder Arfield told BBC Radio Lancashire.

"These things happen in football. It [the derby against Blackburn] was a magnificent game to play in and to make a mistake like that is just football. The thing you do is get up, get on with it and be professional.

"I really enjoyed the goal, and headers don't come too often for me so I was delighted with that one."

Arfield's effort and a brace from in-form striker Danny Ings proved more than enough for Burnley to continue their exceptional start of the Championship season.

They lie fourth in the table, two points behind new leaders Leicester.

"It's always a work in progress," said manager Sean Dyche. "There's still more we can do and more that we can demand from the players."