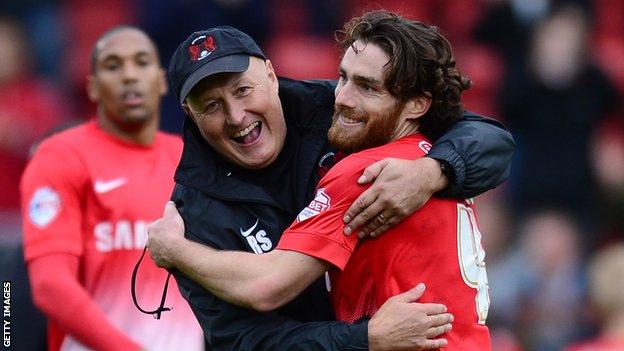 Leyton Orient manager Russell Slade has praised the "phenomenal" hunger of his record-breaking side.

The O's have made their best-ever start to a season, winning their first seven league games, and sit five points clear at the top of League One.

"We have still got to try and improve every day and make ourselves better. That is the target," 52-year-old Slade told BBC London 94.9.

"But you can't question the will to win. That is phenomenal part about us."

The east London side are the top-scorers in the entire Football League with 21 goals, while they also have the tightest defence in League One, having conceded just five times.

Leyton Orient have made their best-ever start to a season, having won their first seven matches in League One.

The O's sit top of the table, five points clear of Peterborough.

Slade is concerned that his current squad lacks depth, but hopes they can continue to capitalise on their current run of form.

"When the grounds gets sticky and the fixtures come thick and fast - that will be the test of our little group," he admitted.

"Every game brings a new challenge. Notts County came with a certain game plan and we had to adjust to it.

"As soon as we began to do that we got on top a little bit," Slade said.

"I asked them to be ruthless in both boxes and that is what I got. But there is still room to improve, that's for sure."

Slade added: "The expectancy is there and we have to embrace that and enjoy that.

"Every game almost gets bigger, but we can't do any more than what we are doing."