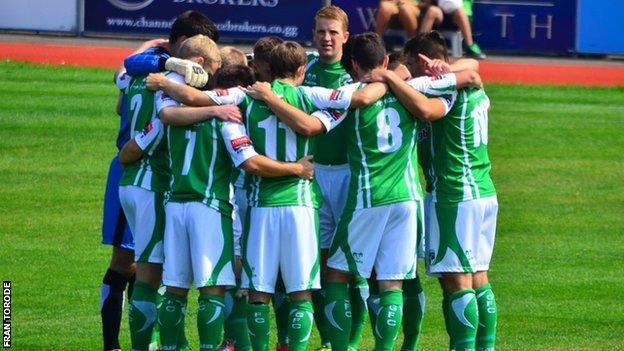 Guernsey FC will have to forgo home advantage in their forthcoming FA Cup tie because of a fixture clash with the rugby club which shares their ground.

The second round qualifying match against Dover Athletic on 28 September would have been the first time FA Cup football had been played in Guernsey.

The Football Association imposed a series of conditions on the Green Lions before allowing them to compete.

Guernsey had hoped to rearrange the match, but Dover refused.

Consequently, to comply with the FA rules, the Channel Island side had to agree to play the match in the UK.

The Green Lions share their Footes Lane ground with National League Three rugby side Guernsey RFC, who play Old Elthamians in a 14:30 BST kick-off on 28 September.

Old Elthamians are not staying on the island overnight, giving Guernsey RFC no room for manoeuvre in trying to change their fixture.

The FA has insisted that all FA Cup matches taking place in Guernsey must kick off at 13:00 on a Saturday, unless the two teams could agree an alternative kick-off time.

Guernsey had suggested an evening kick-off on the same day as the rugby game, but the club says that Dover refused because they did not want to play on a pitch which had just been played on - and potentially cut up - by rugby players.

An offer was also made to play the fixture as a Friday evening tie on 27 September, but this was turned down by Dover on the grounds that their players would have insufficient time to arrange time off work

The Conference South team also refused to play the tie on Sunday 29 September.

The Green Lions have enjoyed strong away form so far this season, with five wins and a draw on the road in all competitions - including a in the first round of FA Cup qualifying and a in the preliminary round.

Guernsey FC were founded in 2011 and have enjoyed a rapid rise up the leagues since their formation.