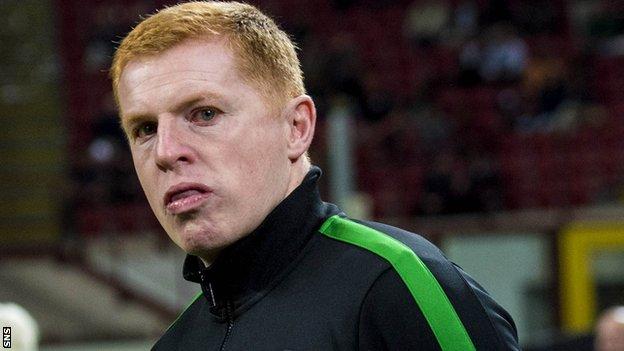 Celtic boss Neil Lennon says his side were unlucky to be beaten by AC Milan in their Champions League group opener.

They were undone by two late goals at the San Siro. Emilio Izaguirre deflected Cristian Zapata's 82nd-minute shot into his own net before Sulley Muntari added a second soon afterwards.

"The scoreline flatters Milan - there wasn't two goals between us at all," said Lennon.

"I felt at times we were the better team playing the better football."

The two late goals, however, were enough to leave Celtic heading home pointless for the 20th time in 22 away games.

Lennon said: "I'm very disappointed, because for long periods of the game we were the better team.

"To come away from the San Siro disappointed at not picking up a point - or three points - is a mark of how well we've developed and played, but you have to take your chances when you're on top and unfortunately we didn't get the break of the ball.

"I don't know why everyone is so surprised - particularly any Scottish journalists - you've seen us play for the last 18 months. We've got an excellent side; we made the last 16 last year and that wasn't a fluke."

Milan looked frustrated for long spells and Lennon stressed that his players had travelled to Italy confident of returning home with at least a point.

"We were in good spirits coming into the game and we fancied ourselves to get some kind of result," he said.

The Celtic manager's attention now turns to another mouth-watering Champions League clash, at home to Barcelona on 1 October.

The Spanish giants hammered Ajax 4-0 in Group H's other game on Wednesday.

"We have Barcelona coming up, who are a different animal.

"We had two epic games with them last year and I've told the players to hold on to the feeling of disappointment tonight and take it into the game in two weeks' time.

"We're here to compete and we're here to try to qualify, and nothing changes my view on that after tonight's performance."