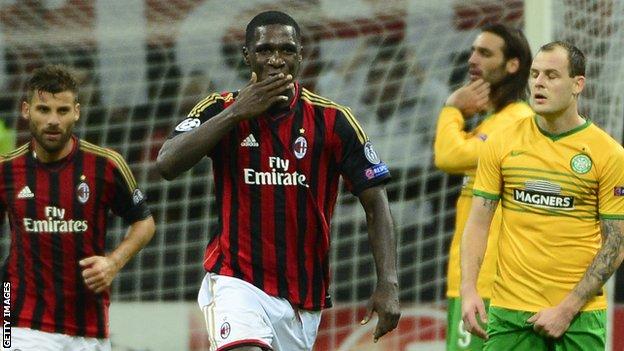 The Scottish champions, who conceded the two goals in the last 10 minutes, .

"I believe they still have chances of qualifying out of the group, but everything is still open, so we will see."

We had luck a couple of times in the game, but it was a positive performance and an important victory for us

Barcelona defeated Ajax 4-0 at the Nou Camp to suggest that the Spanish will live up to their billing as Group H favourites.

Milan, who were minus a number of first-choice players through injury and have had an indifferent start to their Serie A campaign, struggled for long spells at home to Celtic.

They needed a Cristian Zapata shot deflected off Emilio Izaguirre to open the scoring before Sulley Muntari bundled in the second after goalkeeper Fraser Forster parried a Mario Balotelli free-kick off the line.

"We had luck a couple of times in the game, but it was a positive performance and an important victory for us," added Allegri.

"My side improved in the second part of the game and they will improve further.

"There are some players who haven't played before, but this team has to be admired - they all defend together."