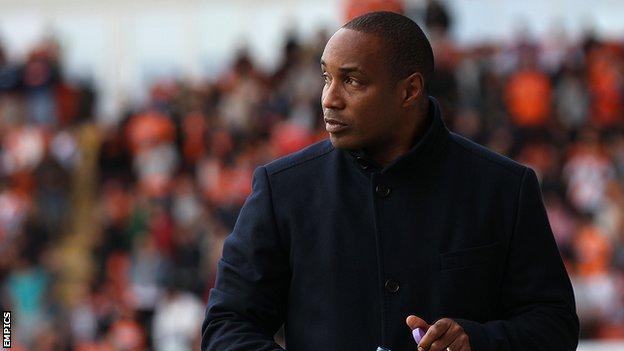 Blackpool manager Paul Ince has been given a five-match stadium ban by the Football Association for his conduct towards a match official following his side's 2-1 win at Bournemouth.

The 45-year-old admitted three charges relating to his actions in the tunnel after the game, including that his behaviour constituted violent conduct.

He had also been charged with using abusive and/or insulting words and threatening words and/or behaviour.

The charge against assistant manager Alex Rae of using threatening behaviour towards a match official following the Championship match on 14 September was not proven.

The suspension, which will begin with immediate effect, prevents former England captain Ince from attending the ground where his side are playing on a match day, starting with the home game against Wigan on 19 October.

It means Ince will not be present at a Blackpool game until 30 November, when Sheffield Wednesday are the visitors to Bloomfield Road.

The Scot was found to have used abusive and insulting words and behaviour with a reference to gender during a League Two match between his former side Crawley and Bradford.

Former Manchester United, Liverpool and Inter Milan midfielder Ince, who was for comments made about a referee following the Championship club's League Cup exit at Preston, was sent to the stands in the latter stages of the match at Bournemouth after a bottle he threw inadvertently hit a female supporter. Ince according to Rae.

Blackpool have not won since their victory at Bournemouth, a result which put them top of the Championship table, drawing four and losing one of their subsequent five matches.

A club statement read: "Blackpool Football Club acknowledges the decision of the Football Association and will now work closely with Paul and his coaching staff to ensure that the penalty imposed does not affect our short or long-term objectives.

"The club will be making no further comment at this stage."