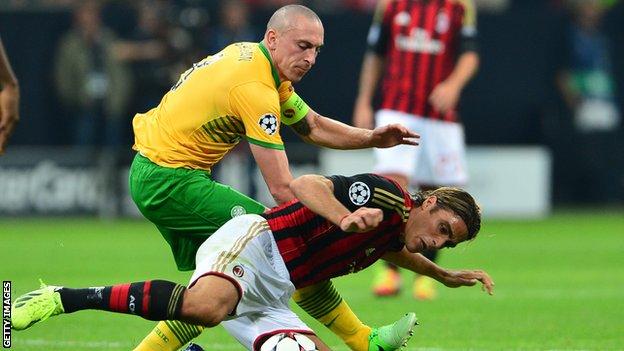 Disappointment was etched on Lennon's face as he struggled to come to terms with the two late goals from the home side that had blighted a hugely promising showing from his players.

For much of the match in the San Siro, the visitors went toe-to-toe with one of European football's heavyweights, although it must be acknowledged that this AC Milan were nowhere near the standard of vintage sides in the famous red and black.

Celtic's record on the road in this tournament is dismal, with only one win and one draw in 22 group games.

The club's successes have come in the east end of Glasgow when that tune, the floodlights and febrile atmosphere have produced a near-delirious alchemy that has seen the men in green and white prevail through sheer force of will on occasion.

Away days have lurched from the hapless to luckless, with an over-reliance on endeavour alone. But this was different.

Okay, their luck was out again as Emilio Izaguirre deflected a shot into his own net on 82 minutes and another goal was lost after Fraser Forster had made an excellent save.

However, Celtic looked more comfortable than ever on their travels and none more so than skipper Scott Brown.

In the heat of battle, the Scotland midfielder has always been a great colleague in the trenches. Only now, he looks officer class.

The 28-year-old, in his sixth season at Celtic, was outstanding.

He outmuscled Nigel de Jong and Sulley Muntari in challenge after challenge, protected his defence with assurance and aggression and picked passes with great composure.

His amazing industry has never been in question, nor his appetite for full-blooded competition.

Where he has improved in leaps and bounds is in his reading of the game, while his temperament has also altered for the better.

But there was just a glimpse of the Brown of old when he was booked for a foolish tangle with Mario Balotelli, who took full advantage with his free-kick leading to the second AC Milan goal.

No longer is Brown deployed on the right for big games, with energy seen as his single greatest attribute. With last season's injury worries behind him, he is well and truly established as the team's fulcrum and the team is better for it.

At times, he was almost serene in possession in Milan, gliding past opponents, while his positional play enabled him to be first to the ball time after time.

There were other heartening performances, with Efe Ambrose a colossus in defence and enjoying several surging runs forward, while Kris Commons was full of invention and Forster looked back to his best.

What was lacking were good deliveries from wide positions against suspect full-backs and a killer touch in front of goal.

Commons played Brown in with a delightful reverse pass midway through the second half.

The captain had a clear run at AC Milan goalkeeper Christian Abbiati but delayed his shot by a fraction, enabling De Jong to make a wonderful recovering block.

The finest of margins are crucial at the highest level and Celtic can also look back with regret at a Georgios Samaras shot that whistled narrowly wide and the Anthony Stokes free-kick that struck the crossbar just before the deadlock was broken.

"To come away from the San Siro and be disappointed not to have picked up a point - or three points - is a mark of how well we've developed and played, but you have to take your chances when you're on top," said a frustrated Lennon.

The group is certainly not going to get any easier for Celtic, with Barcelona up next, and opportunities must be converted if there is to be any hope of a repeat of last season's famous win against the Catalans.