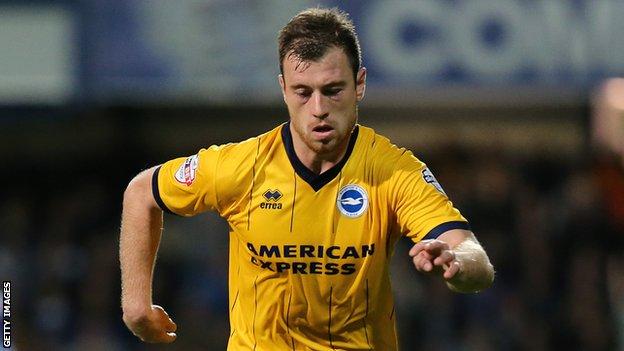 The 23-year-old was used as a lone striker against the R's as Leonardo Ulloa served the first match of his three-game suspension.

Barnes told BBC Sussex: "I'd forgotten what it was like. It was brilliant and I enjoyed every minute of it.

"Playing against two great centre-halves was good. I enjoyed being up there, [which is] where I want to be."

I just want to get on the scoresheet really. If I keep playing like I did against QPR and Reading I'm sure it won't be a problem

Barnes was often used out wide in a three-pronged attack or as an attacking midfield player by former Seagulls manager Gus Poyet last season.

He started three of the first four games this season under new head coach Oscar Garcia, scoring once, before a hip injury ruled the ex-Plymouth man out for a month.

He returned to action as a second-half substitute in the goalless draw at Reading on Sunday following Ulloa's dismissal.

Barnes, who scored 20 goals as Brighton won the League One title in 2010-11, says it has taken time to re-adjust to being the focal point of the attack.

"I had a few chances when I came on the other day [at Reading], which was pleasing for me," he said. "It's about getting the right runs and the right movements again rather than figuring out runs from out wide.

"I feel good within myself and am raring to go. I just want to get on the scoresheet really - that is the next step. If I keep playing like I did against QPR and Reading I'm sure it won't be a problem.

"I only had one chance against QPR but it was mainly about the link-up play and getting other people involved."