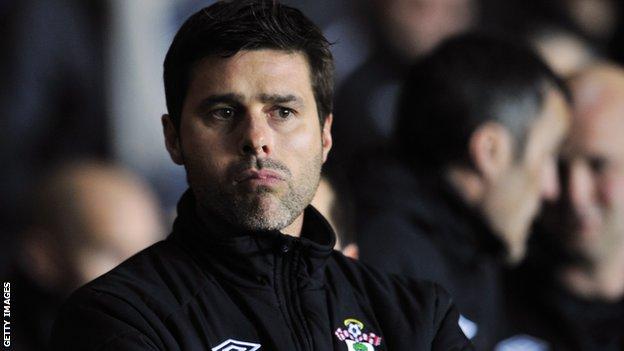 Southampton manager Mauricio Pochettino insists he is unconcerned by his side's failure to score from open play in the Premier League so far this season.

Including last term, Saints have not scored from open play for 393 minutes.

But Pochettino says it not an issue as his side head to Anfield to take on Liverpool on Saturday.

"I'm not worried about it," Pochettino told BBC Radio Solent. "My main concern is that the team keeps growing and the players keep understanding each other."

Despite hammering Championship side Barnsley 5-1 in the Capital One Cup, Southampton's only league goals this season have been a Rickie Lambert penalty and Jose Fonte's header from a James Ward-Prowse free-kick.

However, had it not been for the excellent form displayed by West Ham goalkeeper Jussi Jaaskelinen in the 0-0 draw at St Mary's on Sunday, the Saints may have found the back of the net.

"We have had many good chances, such as in the game against West Ham, so it is not something that worries me," he added.

"What really worries me is that we keep growing and keep improving and get the three points from every single game we play in.

"On the defensive side we need to improve also, we need to find the right balance between the two."