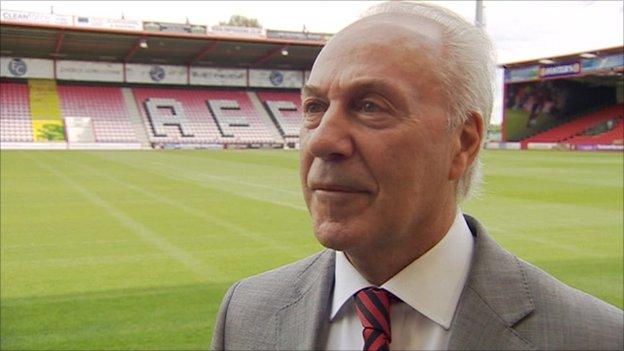 New Bournemouth chairman Jeff Mostyn says the club's wealthy Russian owner Maxim Demin will not rest until the club are in the Premier League.

Demin has invested millions in the Dorset club, both on and off the pitch.

Mostyn, who was named Cherries chairman for the second time on Thursday, says Demin is determined to take the Cherries to the next level.

"Maxim has dreams and ambitions and he will not be satisfied until we reach the top," he told BBC Radio Solent.

Mostyn, who was previously chairman in 2007, admitted he has also allowed himself to dream of the club being in the top flight, but everyone connected with the Goldsands Stadium must be patient.

"I'm a dreamer, which is why I'm still at the football club," he said.

"You have to have fantasies and certainly it is fantasy football for us at the moment, but I see my role to keep everybody's feet on the floor without being negative.

"Rome was not built in a day so we have to work hard together as a team, on and off the pitch, towards that goal."

Demin, formerly co-owner of the club, bought the 50% stake owned by ex-chairman Eddie Mitchell and his wife Brenda earlier this month, and Mostyn believes that shows the commitment and desire of the Russian businessman.

"No one could demonstrate more commitment then buying the other half of the football club. Now as the sole owner everyone will see his intention to push the club beyond where we are today," he added.

"That's reassuring for our fans, who are the one common denominator. So I'm thrilled for the fans that we have an owner who is not only capable of taking the club on but has the desire - and that is also reassuring for the staff."