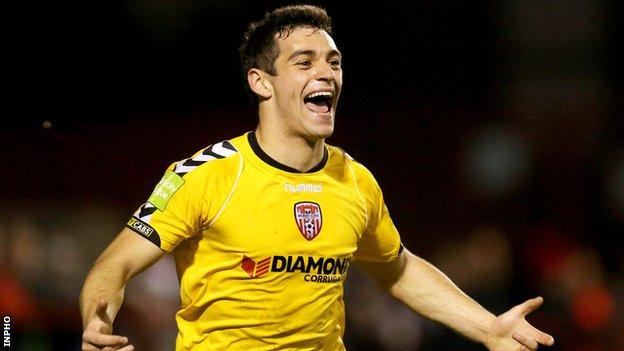 Derry boosted their bid for European qualification with victory over Bray at the Brandywell on Friday night.

David McDaid broke the deadlock after four minutes with a powerful header, before the visitors spurned a host of chances to level in the opening period.

Rory Patterson fired a shot against the crossbar before substitute Michael Rafter slotted home to seal the points after 77 minutes.

City's first win in four keeps them in fourth place in the table.

Derry went ahead when McDaid and Simon Madden combined, the latter providing a pinpoint cross for the former to direct his header home from eight yards.

Ishmahil Akinade had three chances to level for the Seagulls but was denied by keeper Gerard Doherty on each occasion, while Patterson and Michael Duffy went close for City in an end-to-end first half.

The game should have been over as a contest after 53 minutes when Barry Molloy sent Patterson clear, the former Plymouth man smashing a shot off the crossbar.

Fellow substitute Patrick McEleney put Rafter through as Derry broke from a Bray attack, and the striker kept his composure to finish into the bottom corner of the net.

It was Rafter's third goal of the season against Bray after his double sealed a 2-0 win, also at the Brandywell, back in April.