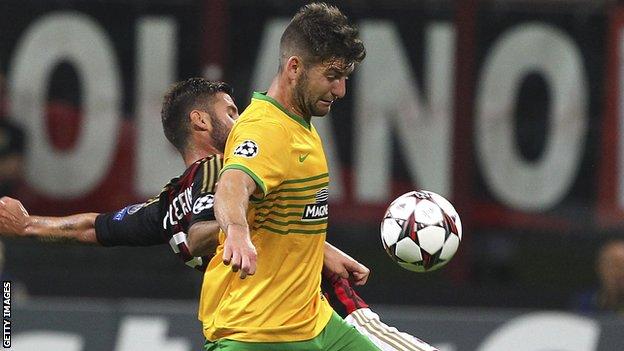 Celtic will not settle after brave defeats in the Champions League, midfielder Charlie Mulgrew has insisted after their .

AC Milan hit the Scottish champions with two sucker punches in the last 10 minutes of their Group H opener.

"We're here to compete in this group, not just put in good performances and get beaten and come away happy," Mulgrew told BBC Scotland.

Celtic next host Barcelona, the group favourites who lost in Glasgow last season but who opened their campaign with a 4-0 destruction of Ajax in the Nou Camp.

Mulgrew said Celtic would keep believing they can qualify for the last 16, a stage they reached last season, while it was mathematically possible to do so.

"We've got to be positive," said the Scotland international. "The next game comes around in a couple of weeks and we've got to be ready for that and quickly put this result out our system.

It felt quite comfortable and maybe, if we had taken one of our chances, it would have been a different result

"I think we're growing well in the competition. There's a lot of belief in the squad - the manager installs that in us - maybe just a bit of belief missing in front of goal."

Mulgrew echoed the , who thought Celtic deserved to take at least a point from the game in Milan.

"It's just a massive disappointment," said the midfielder. "I thought we played well and maybe just couldn't take our chances.

"It felt quite comfortable and maybe, if we had taken one of our chances, it would have been a different result.

"But that's the Champions League for you and we have to pick ourselves up."

Anthony Stokes had in previous seasons found himself on the bench for Champions League group games but has been given his chance as a lone striker following the summer departure of Gary Hooper to Norwich City.

"I was obviously delighted to play and I felt comfortable, but I'm just disappointed at the result," said the striker.

"We had nothing to lose and went out with the frame of mind that we are going to play football and that's what we've done.

"We had no intention of sitting back and trying to soak up pressure for the whole game.

"We tried to create chances and tried to get at them."