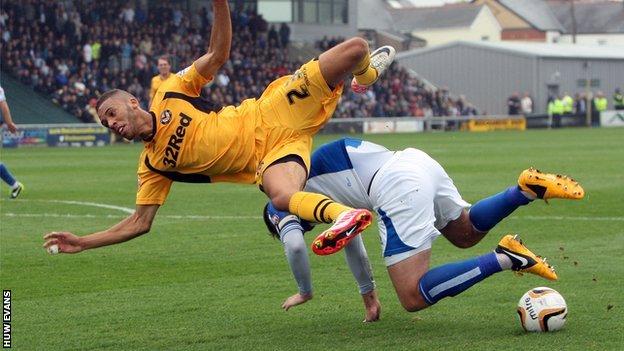 The 25-year-old has been hampered by a groin injury at the start of the season and will have an operation on Saturday.

Jolley will miss Saturday's League Two trip to Exeter and will probably be out for the best part of a month.

"With the operation, we know he helped us out putting his body through it and probably making his injury worse than it is," Edinburgh said.

"But we got through and we're hoping the longest that will be [Jolley will be out] is 21 days from being fully recovered and back in full training."

Jolley's strike partner Aaron O'Connor, last season's top scorer, has not played this season because of a groin injury, but could be available for the visit of Torquay United on 28 September.

Despite a lengthy injury list, Newport have made a creditable start back in the Football League after winning the Conference Play-off final last season and sit 12th in League Two - although they have not won for five games.

"You mustn't underestimate the start and the performances we've had throughout this season for the players we've been missing," Edinburgh added.

"I would think it would be very hard for many teams to have coped with the amount of players and experience that we have had missing.

"That's a credit to the team that they've been able to put in the performances they have."