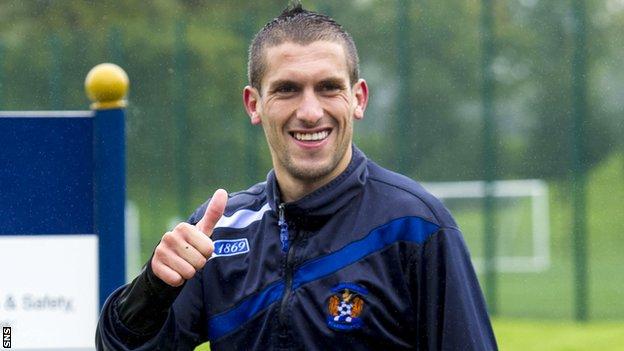 Kilmarnock have signed Algerian central defender Ismael Bouzid until the end of the season.

But and one-time Hull City forward Tijani Belaid are not being kept on.

Bouzid will go into the squad for Saturday's Scottish Premiership visit to Partick Thistle.

Silva, capped once for Cape Verde, was released last summer after a two-year spell with Killie and joined Olhanense in his native Portugal, the 26-year-old being formerly of Porto, Tourizense, Lokomotiv Mezdra and CSKA Sofia.

Bouzid made 65 appearances for Hearts in two seasons, during which he won an international recall with Algeria, before leaving for Greek club Giannina in 2011.

Having had spells at Kaiserslautern and Galatasaray prior to his Tynecastle move, the defender most recently played in his homeland with Alger.

Assistant manager Sandy Clark praised the efforts of the 34-year-old Novo, the former Raith Rovers, Dundee and Rangers forward released by Huesca, and Belaid, a 26-year-old who also spent last season in the Spanish Second Division, with Moreirense.

"Nacho is not with us now," added Clark. "We are looking at certain positions to fill.

"But, for Nacho's position, we have got plenty of players who can fill that role.

"He came in and worked really hard, was a great lad and showed great attitude, but unfortunately we can't take everybody.

"As for Tijani, he is a really good player, but again it is an area where we are fairly well covered, although it's one we may look at further down the road if he's still available and we can move on a few."