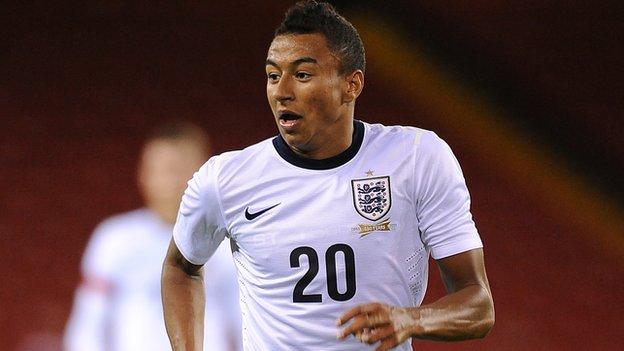 Warrington-born Lingard, 20, has been signed until Sunday 20 October, making him available for five Championship matches for struggling Blues.

Lingard, who last month won his first England Under-21 cap, against Scotland, is yet to make his United debut.

Lingard and the Three Lions

Jesse Lingard's England Under-21 debut came against Scotland in a 6-0 win in August, when he came on as a substitute for former Birmingham player Nathan Redmond

But he did play on the club's pre-season tour, scoring twice against the A-League All Stars in Sydney.

The Blues are in need of extra strike power, having scored only four times in seven matches this season.

Having lost five of their first seven matches, their tally of four points from seven Championship games represents their worst start to a season in 25 years.

And Lingard, who helped United lift the FA Youth Cup in 2011, is expected to go straight into the Birmingham side for Saturday's home match against fellow strugglers Sheffield Wednesday.

The former England Under-17 international, who can play on either flank or in a central role, made the bench for United in the League Cup last season.

He then spent two months out on loan at Leicester City, making five late second-half appearances off the bench.