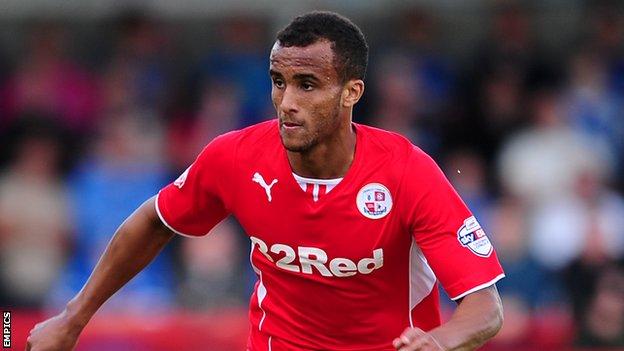 Crawley Town defender James Hurst is looking to establish himself at the League One club.

The 21-year-old right-back joined the Reds on a one-year deal this summer and has made seven appearances for the club so far this season.

He told BBC Sussex: "When it looked like I wasn't going to get a regular place at West Brom I was searching for somewhere I could get regular games.

"Hopefully that is here. I've really enjoyed it and I hope to carry on."

There is somebody just as good as you ready to step in if the gaffer doesn't think your performances are up to standard. You have to be on your toes

Hurst had loan spells with Blackpool, Chesterfield, Birmingham and two with Shrewsbury during his time with the Baggies and featured for Icelandic side IBV this summer on a short-term deal.

"Everything I have done has helped me, experience-wise," he added. "I think I have done a reasonable amount for my age. I just hope to kick on now and get regular games and 40 games a season.

"You can only really learn from playing."

Hurst has started five of the West Sussex's club's league games this season but is wary he must not let complacency creep into his game.

"You can't turn up every week and expect your place," he said.

"There is somebody just as good as you ready to step in if the gaffer [Richie Barker] doesn't think your performances are up to standard.

"You have to be on your toes all the time to keep your place."

Crawley sit 10th in the table after just two defeats in their opening seven games and the former Portsmouth trainee believes they can maintain a promotion challenge.

"There hasn't been a team which has been too much better than us," Hurst said.

"We have held our own in every game, we have some good players and I think we are as good as anyone.

"I can't see why we couldn't push for the play-offs. As soon you are there anything can happen."