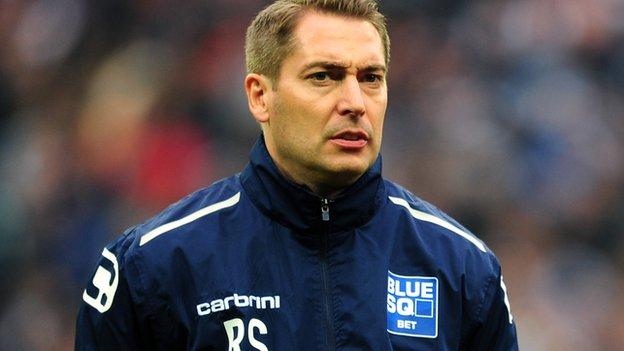 Grimsby Town have confirmed that joint-manager Rob Scott has been sacked for "gross misconduct".

The club announced earlier this month that Paul Hurst had been placed in sole charge of the club.

Scott's sacking relates to an incident in the defeat by Nuneaton.

A statement on the club website said: "For a considerable time the club and directors have worked with Rob Scott in an effort for him to accord with an acceptable standard of conduct."

It continued: "Given Rob's failure to improve and the circumstances relating to gross misconduct during the Nuneaton home fixture led to the disciplinary panel concluding there is nothing to suggest he was likely to change.

"It is therefore with regret Rob's employment with the club has been terminated in accordance with the club's disciplinary procedure.

"The club appreciates and understands the fans frustration in not knowing the detail relating to this situation and thank them for their loyal support at this difficult time."

In their time together at Blundell Park, Hurst and Scott led the club to successive 11th-place finishes in the Conference Premier before finishing fourth last season, as well as reaching the final of the FA Trophy.