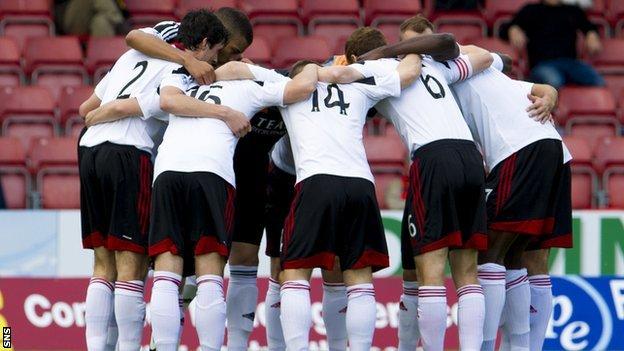 A number of Dons fans have voiced their concern at the gesture, which has become synonymous with Celtic.

"It's caused some upset, but we don't like to call it the huddle, we call it the 'Aberdeen bosey', as I've seen it called on Twitter," said Langfield.

As the manager said, it won't happen all the time, but sometimes the younger boys need that

"It was just one of these spontaneous things that happened.

"We had a young team on Saturday and it's something that the manager and the boys, the older boys, had discussed.

"As the manager said, it won't happen all the time, but sometimes the younger boys need that."

McInnes said: "It's a good challenge for us.

"Get a result in that one, it makes the next one that bit easier in terms of how we're feeling, in terms of our frame of mind.

"It's important that the players go into each game as confident as we can."