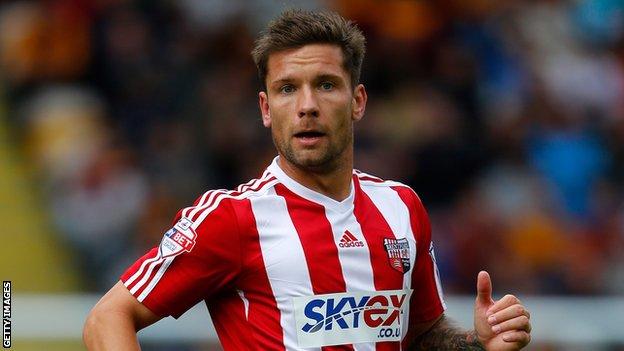 Brentford winger Martin Fillo says it has taken him time to adapt to the English game.

The 27-year-old has scored once in six appearances for the Bees after joining on a season-long loan move from Czech side Viktoria Plzen in July.

He told BBC London 94.9: "I needed some time to adapt because the training is different but I think I am there now.

"The pace of the game is very high. You have to prove every week that you belong to the squad."

He added: "It is a big change and I needed to find a new place to live for me and my family.

"There were many things to do besides football. I am happy and enjoying it here."

Everybody needs to get playing and it is very important to keep the players on their toes and in match form. Everybody will be needed

After being beaten in last year's League One play-off final, Fillo hopes he can help the west London club to mount another promotion challenge.

"The owner [Matthew Benham] has invested in new players and we have improved the squad," the Czech Republic international said.

"We want to go up after what happened last year. It is a good team and a good squad and there is quality here.

"It is nice pressure. I do not know this league so well but we will see at the end of the season."

Meanwhile Brentford manager Uwe Rosler says he wants to send some of his squad players out on loan.

"I think we have a little bit too many bodies at the moment," Rosler told BBC London 94.9.

"Ideally I would like to loan out one or two players. That would released the pressure on the squad a bit.

"I am sure one or two players will go out on loan in the next one or two weeks.

"Everybody needs to get playing and it is very important to keep the players on their toes and in match form as everybody will be needed."