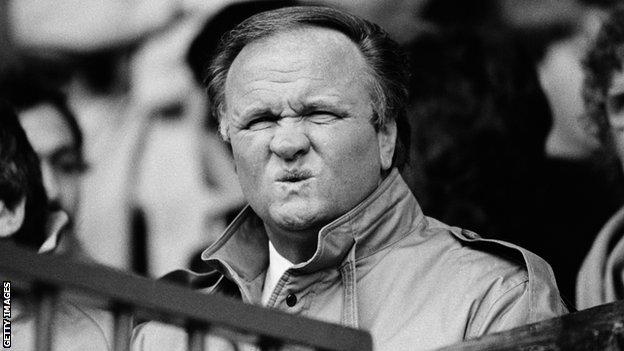 United's coach driver was on the City bench, while on the pitch there were 10 home-grown talents and only one foreign player: it is fair to say that the last Manchester derby without Sir Alex Ferguson in one of the dug-outs was very different to the game that will be watched around the world on Sunday.

Back in the autumn of 1986, in the last days of Ron Atkinson's Old Trafford reign, it was a new experience for the derby to be witnessed outside of Manchester at all.

When Manchester United went to Maine Road on 26 October, it was the 118th meeting between the two sides, but the first to be broadcast live on TV.

Viewers who tuned in to 'The Big Match Live' on ITV after eating their Sunday lunch were treated to a full-blooded clash that ended in a hard-fought 1-1 draw.

In the Blue corner

"My first Manchester derby as City's manager - and I am looking forward to it. Live television too, and that means the whole of Britain will be able to judge whether we have been playing without luck or we deserve to be bottom of the First Division."

Something similar might be served up this weekend when Ferguson's replacement David Moyes takes a United side to the Etihad Stadium for the first time.

But, while Moyes and Manchester City boss Manuel Pellegrini will both see the outcome of this game as vital to establishing their team's title credentials, 27 years ago neither the Reds or Blues were looking much like trophy contenders.

Quite the opposite in fact - they were both in the relegation zone of what was then called The Today League Division One, sponsored by a now defunct newspaper, and on their uppers themselves.

United's expensively-assembled and ultra-attacking side had been hit by a series of injuries and had lost six of their first eight games.

The flamboyant Atkinson, who had been manager since 1981, was under increasing pressure to deliver the league title that had eluded United since 1967 - and a relegation fight was not part of the deal.

City, who had last been champions a year later, were in even bigger trouble.

They are now one of the world's richest clubs eyeing the game's biggest prizes but in 1986 they were simply trying to survive, paying the price for an ill-advised spending spree in the late 70s and early 80s.

Under chairman Peter Swales, they were more than £4m in the red and paying £1,000 a day in interest on their debt.

That is pocket money for the superstar players in their current squad, but there was not much cash on offer to anybody back then.

"The first thing I was told when I joined and went to discuss money was that they were so skint they would sell their goalposts if they could," said Mick McCarthy, who scored City's goal on the day and was a busy man in the heart of their defence from 1983 to 1987.

"I just did not see City as our serious rivals at that time," Atkinson - who never lost a Manchester derby - told BBC Sport.

"The fans still wanted bragging rights but I never sensed the intensity in the derby that there is now. There was a gulf between the clubs at the time.

"For us it did not have the same edge that playing Liverpool did. Maybe that was because I played it down - I used to just say to the players beforehand that we are playing a team in blue that are just down the road.

"These days it is different, because City are a major force, but back then I would never look for the derby in the fixture list or treat it differently.

"We expected to beat City - it was Liverpool that we looked for, and that was were the antagonism was."

Atkinson, who had been deprived of many of his star players at the start of the season by injury, was under attack from the media, the terraces and former manager Tommy Docherty over results and the performances of his major signings, and badly needed to beat the Blues this time.

City, meanwhile, were bottom of the table and in even more turmoil than their neighbours. There were no big-money buys in their line-up, which was a mixture of rookie teenagers like David White and gnarled veterans like Kenny Clements.

Frustrated by their lack of cash, which had left him without a penny to spend in the summer, their previous manager Billy McNeill had left for fellow strugglers Aston Villa at the end of September, with City pocketing a much-needed £100,000 in compensation.

McNeill's number two, Jimmy Frizzell, stepped up to replace him and tried to make the most of his meagre resources, trading out two recent McNeill signings - Trevor Christie and Robert Hopkins, who promptly had a pop at him in the press.

Back then, unhappy players could not claim their comments had been lost in translation.

On Tuesday, United and City fielded a total of 17 foreigners (not including players from Wales, Scotland, Northern Ireland or the Republic of Ireland) from 12 different countries in their starting line-ups for their Champions League games.

But in October 1986, there were only 15 in total in the top flight, and only one in action at Maine Road - United's Danish full-back Johnny Sivebaek.

Two players joined City in the week of the derby - Tony Grealish from West Brom and John Gidman, who had just been given a free transfer by United after losing his place to Sivebaek and having a fall-out with Atkinson.

Gidman was his first signing at Old Trafford, and would be the final player he sold before getting the boot.

The City programme for the derby claimed Gidman had turned down a lucrative offer from AEK Athens to move to City but he has no memory of any interest from Greece.

"There were offers from elsewhere but then I got a phone call from Jimmy," Gidman told BBC Sport.

"He said he had no money but he could offer me a couple of years. City had some good kids coming through and wanted some experience to go with it.

"I couldn't believe I was making my debut against United that Sunday, and on TV too. I had been best mates with Bryan Robson, Gordon Strachan and Arthur Albiston and now I was playing against them."

"The thing that always makes me laugh when I remember these games is that our coach driver Derek - or Del Boy as we used to call him - would drive us to Maine Road and then go and sit on the City bench," Atkinson recalled.

"He was a funny man and a great laugh. He normally sat in the dug-out with me and he used to make the teas for us at half-time but he was a City fan, and was their driver too."

"I told Peter Barnes I was going to do him. I said I would break his legs.

'Del Boy' was not the only one to have links with both camps that day. Gidman, a buccaneering right-back who had helped United win two FA Cups, was marking Peter Barnes - a former City favourite who was showing signs of his old sparkle since moving to United. They were friends, but there was no sentiment on show.

"I told Peter I was going to do him," said Gidman, who now lives in Spain but will be watching the derby avidly on Sunday. "I said I would break his legs.

"He knew my weaknesses after we had played together but I knew his too and I gave him some chatter. I love him but the chat worked - he was taken off after an hour. It was part of the game and we laughed about it later.

"I was more worried about how the City fans would take to me. That was the worst thing because only a few players had gone from United to City and I was thinking to myself, as soon as I touch the ball they are going to be shouting 'dirty Red' at me.

"But they were brilliant. Different class."

United took the lead through a Frank Stapleton header that crept past the diving Perry Suckling and inside the post, but City responded.

McCarthy equalised with the epitome of a towering header and honours were even at the end, not that it eventually did either manager much good.

United chairman Martin Edwards acted after a 4-1 League Cup defeat by Southampton. Within 24 hours, Ferguson had been installed as his replacement - and the rest is history.

United eventually finished 11th, but City's form did not pick up and they were relegated, along with McNeill's Villa side, after going the entire season without an away win and scoring just 36 goals in 42 games.

Frizzell was replaced by Mel Machin at the end of the season but stayed at the club as his assistant. That was the first of 15 managerial changes by City while Ferguson was in charge across the city. The final one saw the dismissal of Roberto Mancini in May, just before Sir Alex's retirement.

Like Moyes, Pellegrini will be a derby debutant at the weekend - and he is unlikely to invite United's bus driver to join him in the dugout.