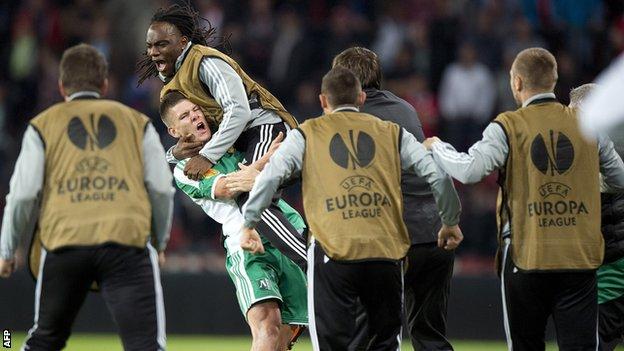 The Bulgarian side were only founded in 2001 and goals from Roman Bezjak and Virgil Misidjan ensured they made a winning start against the Dutch side.

Located in north-eastern Bulgaria, Ludogorets were formed in 2001 and won the A Group trophy and the Bulgarian Cup in their first season in the top flight.

Swansea are top of Group A although St Gallen of Switzerland are only one goal behind courtesy of goals from Goran Karanovic and Marco Mathys in a 2-0 victory over Russian side Kuban Krasnodar.

Other British representatives Tottenham, lead the way in Group K after Sheriff Tiraspol played out a goalless draw against Russian side Anzhi Makhachkala in Moldova.

It was the German side's first European match for six years and they were already three goals in front, through Vaclav Kadlec, Marco Russ and Constant Djakpa before Orban was dismissed for fouling Stefan Aigner.

On-loan Manchester United forward Bebe had a disappointing evening as his Portuguese side Pacos Ferreira were beaten 3-0 in Italy at Fiorentina, with goals from Gonzalo Rodríguez, Matos Ryder and Giuseppe Rossi.

French side Lyon, who failed to make the group stages of the Champions League for the first time since 2002, could only collect a point from a game of few chances in a goalless draw at Spain's Real Betis.