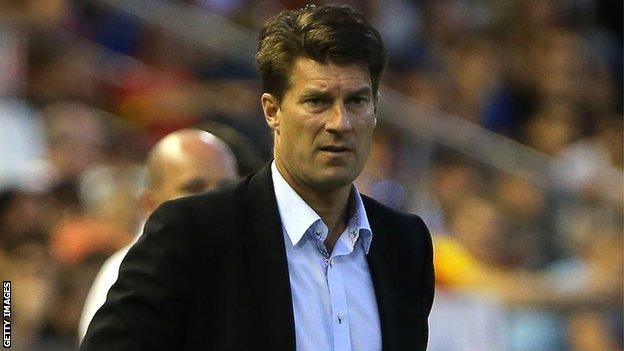 Wilfried Bony scored soon after Adil Rami's sending off for the hosts and Michu and Jonathan de Guzman struck in the second half at Estadio Mestalla.

He added: "We dominated the whole game. They had nothing really and we had... another three or four big, huge chances to score. So I'm very pleased."

Laudrup felt the result was far from a foregone conclusion despite Valencia, who have played in two Champions League finals, being a man short from the 10th minute.

I was confident we could do something. Of course I did not expect to win 3-0 - who could do that?

"[It was] fantastic to win a game against a big club like that in a European competition so of course I'm very pleased," the Dane said.

"A lot could say that the red card had a huge influence and impact on the game.

"It is true that it's more difficult with 10 men rather than 11, but we've seen so many times home sides coming back even with one less."

Beforehand Laudrup felt his side had nothing to lose as Group A got under way.

But, following the manner of his side's fightback for a 2-2 Premier League draw against Liverpool four days earlier, he was also confident heading to Spain.

"I knew we had a possibility and on the one hand I said, 'OK we have nothing to lose - very little to lose, a lot to win'," said Laudrup.

"On the other hand after the great second half the other day against Liverpool I knew we could bring this along as well.

"So I was confident we could do something. Of course I did not expect to win 3-0 - who could do that?

"But I knew we could do well."

Even so, the Swansea boss has urged caution ahead of forthcoming home games against St Gallen of Switzerland on 3 October and Russian side Kuban Krasnodar on 24 October.

The Welsh side face Crystal Palace in the Premier League on Sunday, followed by continuing their Capital One Cup defence against Birmingham on Wednesday, 25 October.

"I have to turn back the clock six years ago to my experience with Getafe was similar to this," said Laudrup.

"We started the group off winning 2-1 at Spurs. And then second game we lost at home to a club from Israel.

"So just to say we have to move on. In our case we have to play in less than three days against Crystal Palace, an important game in the Premier League, and then the cup next week.

"So what we can do - and that's great - is to bring these two results, one better than the other, along with us for the next game."