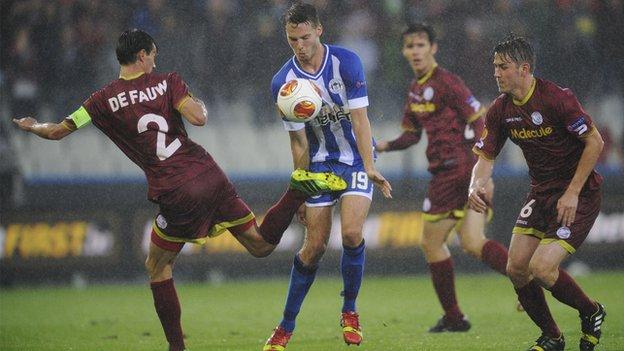 Wigan Athletic manager Owen Coyle praised his side for an "outstanding" European debut after their goalless Europa League draw with Zulte-Waregem.

The FA Cup winners survived late pressure in Belgium after James McArthur had struck the post early on.

"The players performed out of their skins and defended well when they had to," said 47-year-old Coyle.

"Every one of them stood up as a man and performed as I would want a Wigan Athletic team to do."

In the first European tie their 81-year history, Wigan battled in wet conditions against a side who finished second in Belgium's top flight last season.

McArthur's effort was their best opening in an even first half, but they withstood strong pressure in the latter stages and had midfielder Chris McCann to thank for a brave block when Karel D'Haene struck from close range.

"From start to finish it was an outstanding debut in European football," said Coyle, who was himself managing in Europe for the first time.

"They were the home team and trying to push on late in the game. Having said that, as much as we had to defend well, if we had taken care a little bit more on the counter-attack we could have scored a couple of goals ourselves."

Ryan Shotton - making his debut after a deadline day move from Stoke - was one of seven changes to the side which lost at Leicester on Saturday, as Coyle shuffled his pack for the first of three games in six days.

"This is a fantastic competition and we have built a squad where we can make changes that are like for like and not detrimental to the team," said Coyle.

"So come Sunday against Ipswich we will make a number of changes again. We have to give balance and understand that we could be scheduled to play around 60 games this season."