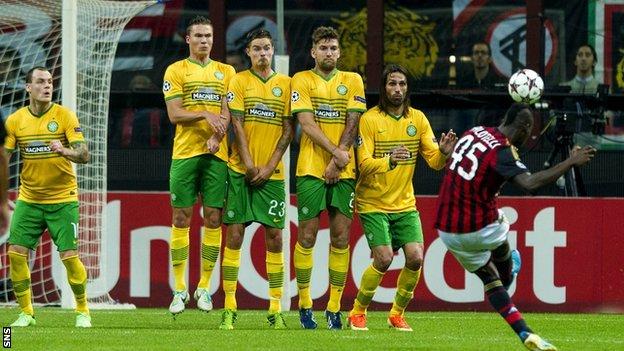 Pain and progress for Celtic, probably divided as evenly as the possession stats in the San Siro.

The pre-match billing told us there would never be a better chance for the Scottish champions to knock one of football's most famous names off their perch. And that's exactly what unfolded before our very eyes.

But, not only did less-than-magnificent AC Milan steer themselves clear of a damaging defeat on the opening night of the Champions League, they managed to snatch a win.

Those two late goals were a cruel conclusion to the match and not what Celtic deserved for the level of performance they delivered in those stately surroundings.

That was agony for Neil Lennon and his team but it shouldn't obscure the strides of improvement they've taken at the top level and the deficiencies they have to deal with to maintain that momentum.

Celtic were hugely impressive, even allowing for Milan's injury problems. The Italian team was still star-studded although didn't look it against opponents they may have under-estimated.

Gary Hooper and Victor Wanyama were big players last season (I'm not so convinced Kelvin Wilson is a major loss) in Celtic's surge to the last 16 of European football's top club competition.

How would they be replaced for this campaign? That was an intriguing question and there's still no definitive answer.

Dutch defender Virgil van Dijk was the only new arrival in the starting line-up against Milan. Nir Biton, Derk Boerrigter and Teemu Pukki all came off the bench.

We've not seen enough of any of that trio to pass judgement. The imposing Van Dijk looks promising in an area which needs strengthening.

In the main, Lennon has replaced Hooper and Wanyama from within the resources he already had.

I think it's worth persevering with Anthony Stokes, who is unproven at Champions League level but possesses undoubted attacking talent.

You would ideally want more than one Charlie Mulgrew in your team but he picked up where he left off with Scotland and delivered another strong showing in central midfield alongside skipper Scott Brown.

The clever promptings of Kris Commons are a big plus. There's real intelligence about the way he locates space and makes things happen.

It's difficult to pick out individuals because Celtic's success for 81 minutes in Milan was based on a team ethic. And they weren't even firing on all cylinders. There's more to come.

For me, Georgios Samaras ran up too many blind alleys. He's a big asset when he's on his game - and he did come close to scoring - but I didn't think he did enough.

And down the other flank, Celtic were pining for James Forrest. He's not exactly the king of consistency when it comes to deliveries from out wide but when he gets it right he can be deadly.

The lack of quality crosses from Adam Matthews was frustrating. I appreciate he's a full-back playing out of position but his pace got him into some great areas and, sadly, that was the end of the threat.

How often did Celtic get themselves into a menacing position around the Milan penalty box? How many saves did keeper Christian Abbiati have to make?

The harsh reality is that Celtic missed a big opportunity to record a result to remember. But that's more of a compliment than a criticism.

You have to play well to make Milan look ordinary. That's what Celtic did. They dominated big chunks of the game and that's got to build belief that the team is taking significant steps forward.