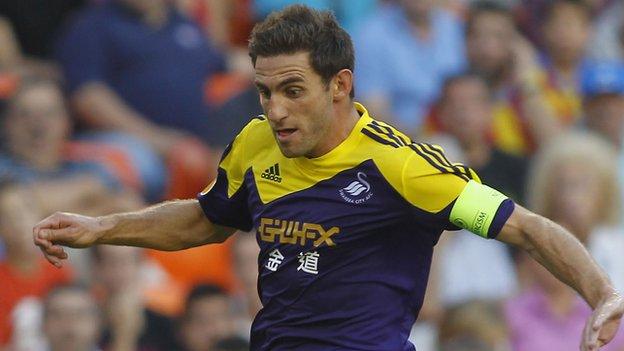 Angel Rangel says leading Swansea to a in the Europa League was "unbelievable".

Since arriving from Terrassa FC in 2007, then in the Spanish third tier, the 30-year-old defender has risen to the Premier League with the Swans.

With Ashley Williams injured Rangel, who had 50 family members at the game, captained Swansea for the first time.

He said: "It's a very proud moment for me. I don't think anyone expected what happened, we showed how good we are."

Valencia had to play with 10 men for the vast majority of the match after defender Adil Rami was sent off for a 10th-minute professional foul when he hauled down Wilfried Bony.

Goals from Bony, Michu and a 30-yard free-kick from Jonathan de Guzman put Swansea top of Group A.

Rangel, whose Spanish home is about an hour's journey from Valencia's Estadio Mestalla, added: "I think we have to be extremely delighted with the performance and the fans have been great as well.

"It's the first time in my career [to be captain] and coming to Spain and winning in a big stadium, and also the way we did, is fantastic.

"Not only for the armband, which is great, but for the whole team. In the end it was a great win.

"I don't think I've realised yet what we have achieved, personally and also the team.

"It's a very proud moment for me because I couldn't reach a higher level than third division in Spain.

"And obviously coming back as a Premier League player and winning the way we did, I think there couldn't be any problem [with the way things panned out]."

Rangel said "just a few - around 50" of his family had been in the crowd.

He added: "I don't live far from here, around an hour or so, so everybody wanted to come over and enjoy the occasion and it couldn't get any better."

But Rangel insisted Swansea's celebrations would be short-lived as they need to rest ahead of Sunday's Premier League encounter at Crystal Palace.