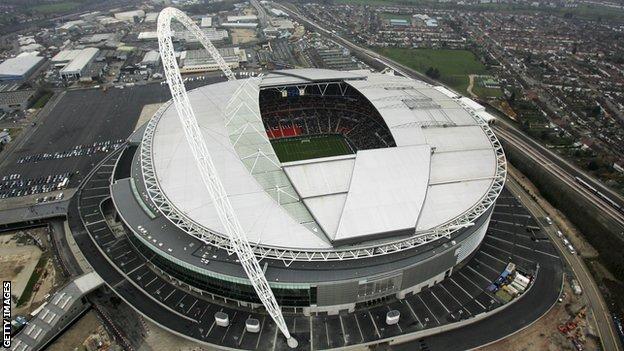 England, Scotland, Wales and the Republic of Ireland have told Uefa they want to stage European Championship matches in 2020.

Uefa says 32 of its members have stated an interest in hosting games after deciding the tournament would be shared among 13 cities across Europe.

England wants to host games in London and Scotland has chosen Glasgow.

Wales has opted to go for matches in Cardiff, while the Republic has picked Dublin as its venue.

All of the major European football nations, including France, Germany, Italy, Netherlands and Spain have also expressed their desire to host matches.

The candidates have the right to change their initial host city selection, but must submit their final choices by 25 April next year.

The English Football Association wants to host either the 'finals' package - which is the semi-finals and final - at Wembley, or a 'standard' package of three group games and a knockout round match, while Scotland is keen on the latter.

Uefa president Michel Platini has previously stated his support for Istanbul to host the finals if the Turkish city lost out on hosting the 2020 Olympics, which it failed to get.

Uefa will decide on 25 September 2014 which 13 cities will host games.

"We are extremely proud to see the huge interest in the bidding process, with more than half of our member associations willing to host matches at Euro 2020," said Platini.

"The finals will be a great celebration of football across the European continent and the 60th anniversary edition will be truly special by really coming to the doorstep of all football fans."

The tournament is usually held by one or two nations and Euro 2016 will be in France, with the competition being expanded from 16 teams to 24.

Uefa has changed the hosting format for the 2020 event to mark 60 years since European football's governing body was formed.

There will be 13 different packages for Euro 2020, with 12 of them including three group matches and one knockout game from either the last 16 or quarter-finals.

The other 'finals' package is to host the semi-finals and the final, and the English FA has expressed an interest in both options.

"We would be delighted for London and Wembley Stadium to be chosen to host either of the two packages available and we look forward to working with Uefa on the forthcoming selection process," said English FA general secretary Alex Horne.

"It would be great to see England playing in front of their home fans here in London as part of a Euro finals tournament, but many countries have also put themselves forward as hosts and we expect this to be a very competitive bidding process."

The Scottish FA has told BBC Scotland it hopes Hampden Park can host the standard package.

"We fit the criteria in terms of capacity and footprint around the stadium," said an SFA spokesperson.

"The one red flag is the number of hospitality boxes, but the feeling from Uefa is that that might not inhibit our chances of hosting games."

The Football Association of Wales said: "The FAW expressed an interest in bidding and will fully evaluate, with our sporting, political and business partners, the possibility of submitting a formal bid when the full details are released by Uefa.

"Showcasing the best international football through the hosting of major events and finals tournaments remains a strategy of the FAW."