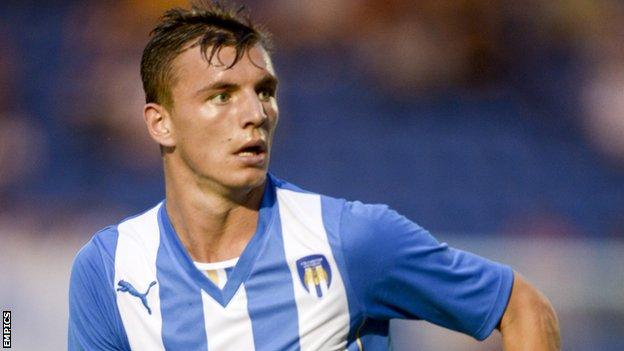 Colchester United boss Joe Dunne has warned midfielder Alex Gilbey to not chase the money, after the youngster rejected a new deal.

Gilbey, 18, is out of contract in the summer and was offered a deal that pays more when he plays more games.

"All the other guys have signed it," Dunne told BBC Essex.

"There's 10-a-penny players who have gone to other clubs and aren't playing and they're ending up not even in League One."

Colchester United's contracts improve depending on the number of games players play.

Youngsters Toisin Olufemi and Drey Wright are both on 'ability based' contracts, which improve financially with every 10 games they play.

Gilbey, who has made four starts this season and eight appearances in total, had been offered the same deal.

"If you play as many games as Jeff Monakana [on loan from Preston] plays you'd probably be one of the highest paid players at the club," explained Dunne.

"One of the big things destroying young players these days is, do you want to play football or chase the money?

"If you're good enough and you play games that other stuff comes anyway. Chase the pound now and you might be great but you might not have any games under your belt.

"I think Alex should stay and play games for us and eventually his move will come.

"Maybe another manager would have sent him back into the under-21s. That's not how I work.

"He's trained every day, his attitude is great, we speak. These things happen in football."