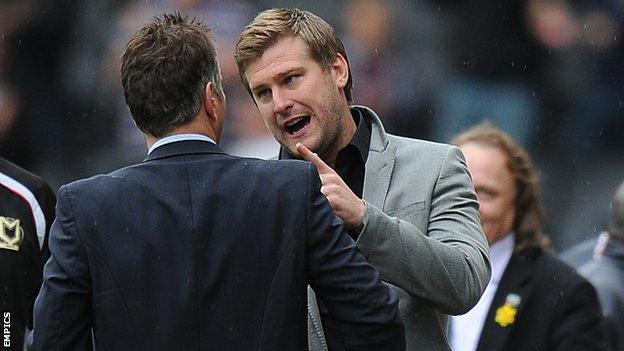 MK Dons boss Karl Robinson has said his side have "immense respect" for their local "enemy" Peterborough United.

The teams compete on Saturday for the first time since Posh won a controversial League One play-off semi-final two years ago.

"They've done a wonderful job behind the scenes. We respect them immensely for their quality of players," Robinson told BBC Three Counties Radio.

"But we're going there as their enemy and them as our enemy."

but Robinson was angered by a refereeing decision that saw Stephen Gleeson sent off and Peterborough awarded a penalty, which they scored to go into the second tie with a one-goal deficit.

Darren Ferguson's Posh closed out the tie with and went on to win promotion to the Championship in the final.

Earlier this week Robinson admitted his outspoken character has made him "public enemy number one" among Posh supporters.

But, with the two sides in the top six in League One and separated by just three points, Ferguson has said he will not be dwelling on past encounters.

"What was it, three years ago? I don't know if he's public enemy number one or if our fans pay that much attention to it, I'm not sure," he told BBC Radio Cambridgeshire.

"It's been a while since we played them. I don't look back on what's happened. Both teams and clubs have moved on since then. I won't be mentioning that to my players at all."