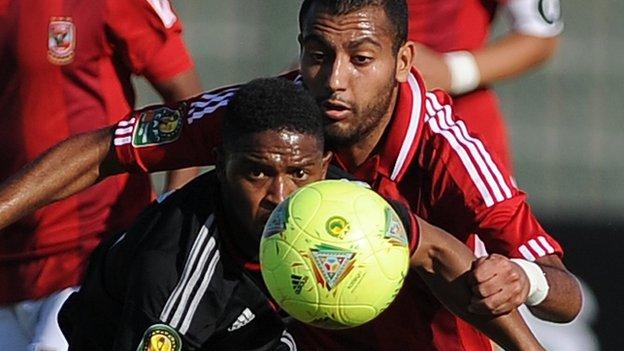 Champions League title-holders Al Ahly and Orlando Pirates both qualified for the African Champions League semi-finals after they played out a goalless draw in Soweto on Sunday.

Al Ahly of Egypt finished top of Group A on 11 points.

They will meet Coton Sport of Cameroon in next month's two-legged semi-final.

South African club Pirates will take on Group B winners Esperance of Tunisia in the other semi-final.

Sunday's final Group A matches also offered the Congolese club AC Leopards a chance to qualify but despite taking the early lead away in Egypt, they were beaten 4-1 by Zamalek in El Gouna.

Leopards and Zamalek both finished on seven points, one less than Pirates, who would have won the group had they taken a host of chances at home to Ahly.

Ahly goalkeeper Sherif El Akrami made two point-blank saves to deny Pirates a home win while Walid Soliman could have stolen an away victory for Ahly midway through the second half but steered his shot agonisingly wide.

"At this level you have to put the ball in the net but we made it to the semi-finals and now we'll have a go," Pirates coach Roger de Sa said after the match.

In El Gouna, Ahmed Gaafar scored twice for Zamalek after Rudi Ndey had offered Leopards a brief glimpse of hope in the first half. Zamalek's other goals came from Mohamed Ibrahim and Mahmoud Shikabala.

The two Group B teams had already made sure of their last four places last weekend but on Saturday, Esperance confirmed their superiority with a 2-1 away win over Coton Sport in Garoua. Khaled Gharsellaoui and Ahmed Akaichi struck in the first half for a second-string Esperance side and Coton snatched a late consolation goal via Daouda Kamilou.

In the other Group B fixture, Portuguese pair Joao Tomas and Nuno Silva netted for Recreativo Libolo of Angola, whose disappointing campaign ended with a 2-2 draw against Ivorian visitors Sewe San Pedro.

Sewe came from behind twice through goals from Nigerien Idrissa Garba and Souleymane Binate in Calulo, south of Luanda.