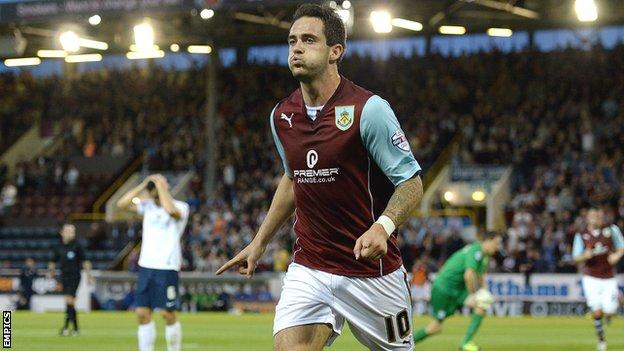 The Clarets, helped by have made light of the loss of Austin, who

"I've always backed myself to say that if I play as a striker, I'll score goals, and it's showing this season," Ings, 21, told BBC Radio Lancashire.

"Last year I dropped back a little bit because of Charlie playing. It's nice to take that role as a striker now."

Many predicted a season of struggles for Sean Dyche's side, especially after Austin - who scored 28 times in all competitions last season - was sold for a fee of about £4m on the eve of the Championship campaign.

But Ings and Wales international Sam Vokes have formed an effective pairing up front, and helping them up to fourth in the table with 14 points from seven matches.

"I've known for Sam for years and when we had a run of games together last year we performed well and got results. We're a good partnership," said Ings, who, like Vokes, came through the youth system at Bournemouth.

Ings has since moving to Turf Moor in 2011 and after participating in his first full pre-season with the Clarets, is showing signs of the talent that persuaded former boss Eddie Howe to pay a reported fee of around £1m for him.

Up next for Burnley, who have won their last three league games, is a trip to Leeds on Saturday.

"The key in this league is consistency," added Ings. "That's what is going to get us to the top level.

"If we can stay fit, we've definitely got the quality on the pitch. There's a good feel around the club. We're getting results and winning games convincingly as well."