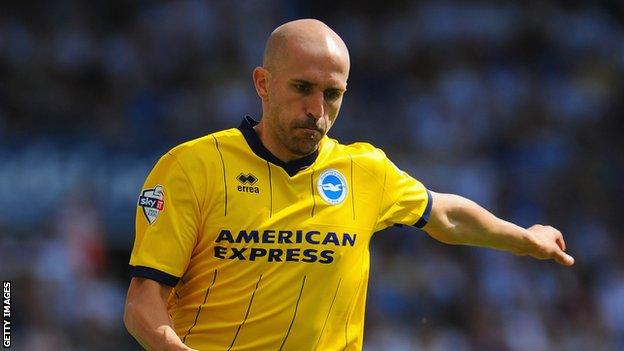 Brighton right-back Bruno hopes he has recovered from the persistent hamstring trouble which had kept him out since the first game of the season.

The 32-year-old made his return as a late second-half substitute in the 0-0 draw at QPR on Tuesday.

He told BBC Sussex: "I was frustrated as when you have injuries of this kind it is so difficult to live with.

"We have followed a plan and now I feel much better. We have to do it slowly, as before I was playing too early."

He continued: "For me it was more difficult as I had never had these kind of problems with my muscles.

"It is worrying too as it is not normal. I am doing a special strength plan and a lot of things.

"For me it [coming on against QPR] was so special as the last month was really hard."

The Seagulls are unbeaten in five games in the Championship, and the former Valencia defender believes the team are still improving following the appointment of Oscar Garcia as head coach in the summer.

"Oscar has adapted well with the team and the team is adapting to his ideology," Bruno said.

"Football is football, here and in Spain. There are lots of kinds of training or you can play a different way.

"We have nine points after the first games and it is difficult with a new manager.

"He is happy here with us and we are happy with him. I think the team is improving each game."